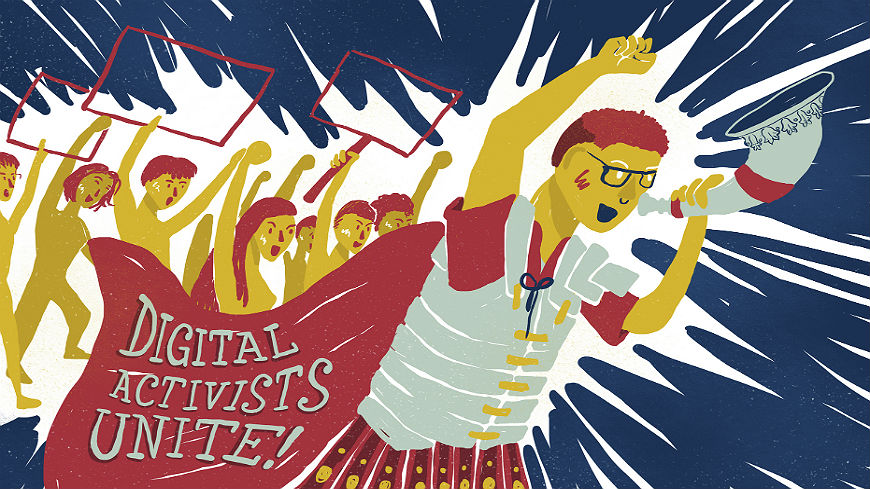 © All illustrations for this article: Ana Mendes

As this article was going to press, finishing this text in the very month when the 50th anniversary of the May 1968 rebellion in France was being celebrated, privacy was making the headlines with news of large-scale data breaches and data leaks. All of us learned that a company called Cambridge Analytica may have harvested user data from Facebook accounts on an unimaginable scale, for the benefit of one side in the UK’s Brexit referendum and the 2016 US presidential election. A little later, US sports goods producer Under Armour announced that a massive data breach may have affected around 150 million MyFitnessPal accounts. Middle-aged and older people may be annoyed, yet young people should be particularly alert. If we as a society seem to have lost control over some recently made innovations, it is young Europeans who have to live longest with the consequences.

Young Europeans must know their digital rights, and they must be prepared to fight for them. The good news is that in Europe these rights enjoy high legal status, yet it may still take some courage to stand up for them. However, as this article will show, the most illustrious digital activists are often young Europeans. Perhaps they are also less easily manipulated, as they have grown up with these new technologies and are therefore less likely to be impressed. The cardinal virtue should not be adaptability but resilience – not an unmitigated “think positive” coolness but critical thinking. The good news is that this is already happening. As the following sections will show, many examples can be found of young Europeans taking action to ensure that their digital rights – and those of other people – are respected. The selected examples of good practice should be seen as examples for others to emulate.

Max Schrems – The right to go to court

Austrian law student Max Schrems (born in 1987) had not yet graduated when he thought he wanted Facebook to send him all the data they had on him. Schrems knew that this was one of his fundamental rights as a data subject in the European Union. Data subjects are the people whose data someone is processing. When Max Schrems was unsuccessful with Facebook he complained to the Irish Data Protection Commissioner (DPC) (https://www.irishtimes.com/business/technology/max-schrems-the-man-who-took-on-facebook-and-won-1.3451485). In every EU country there is a national data protection authority to whom people can turn when they believe their digital rights have been violated, and Max Schrems knew that. When Max felt the DPC could be doing more to help him, he turned to the Irish courts. The courts took the call and asked the Court of Justice of the European Union for a ruling. The EU Court ruled that the DPC must investigate the case, as well as all colleagues in other EU countries, in similar cases. Data processing operations are not legal by default. Actually, data controllers (those who process people’s data) must be able to justify that they are entitled to do so. And data subjects have a right to see their data, to have them corrected and even deleted.

But let’s not forget that digitisation doesn’t only bring threats: it also brings opportunities. In the case of Max Schrems, crowdfunding and a dedicated website allowed a student to take on a multinational company. Young people need access to education that makes them critical and resilient. But when education systems seem to work very hard just to keep pace with innovations driven by the tech industry, the right knowledge is not easy to get hold of. Young people need to be aware that large-scale digitisation efforts are driven by tech companies because this matches their commercial interests. When cloud services enter schools’ classrooms, they come with new risks and tasks. Where is the cloud located? Which documents can we upload legally and which must stay within our own computing environment? Documents may include pupils’ personal data, such as name, birth date or the marks given for a particular assignment. Such documents cannot be uploaded to a cloud service if the server is located outside Europe. But do teachers know, and do pupils? Speaking of resilience sounds good – practising it may be quite another matter.

But do schools really need these cloud services? What is the added value for an assignment which is just half an A4 page? We cannot exclude that these changes are driven by wider, essentially commercial strategies and that they may rather serve to promote a cultural change in today’s pupils. If pupils learn to use cloud services without any questions being asked, they may take it for granted that cloud service use is unproblematic and uncontroversial. To proponents of unregulated cloud computing environments, such a cultural change would be most welcome. If the adults of tomorrow come to regard cloud services as so obvious that you don’t even talk about it, much would be achieved for tech companies. Yet access gained to the education system today is a result of having convinced today’s decision makers. They are typically middle-aged or older, and it cannot be excluded that new generations of young digital activists will question some of these decisions. In Europe they might, in many cases, find that they have the law on their side. Meanwhile, in California, some young parents are becoming famous as “refuseniks” because they prefer sending their kids to schools where mobile phones, tablets and even laptops are banned. Their kids will write with pencils and paper to maintain some key skills which may be lost in the wake of forced digitisation. What do those refusenik parents do? They work for tech companies and they are concerned that the IT tools they help develop can make people dependent. They are critical of what they call the attention industry.

Jan Philipp Albrecht and the law of tomorrow

Lawmakers don’t always have grey hair. Jan Philipp Albrecht (born 1982) is a young Member of the European Parliament, and he has been a key player in ensuring that people’s digital rights will be respected better in tomorrow’s Europe. Such legislative change can help bring tech-driven innovations back into the political and legal mainstream. When the General Data Protection Regulation of the European Union went through the European Parliament, as part of an incredible legislative marathon involving 4 000 amendments, the rapporteur was Jan Philipp Albrecht. Albrecht belonged to the mainstream, because he had been elected by European voters, just like every other MEP. As such, he had real power, and now the GDPR may be the most progressive privacy law in the world. According to George Soros, “only the EU can break Facebook and Google’s dominance”. And according to one South African lawyer, John Giles, “Any country that’s not working toward these standards is left out in the cold”. This owes much to young European digital activists.

Christopher Wylie and the courage of the whistle-blower

The global attention industry has learned to develop tools that will keep our attention for as long as possible. If these techniques are combined with the potential of social networks for harvesting personal data, building profiles and targeting messages to individuals, the result is redoubtable. If it is used in elections, the margin for exercising critical thinking and free agency may be narrowed considerably. Young people need awareness of these risks, especially as they may be targeted with emotional messages. This is basically what the Cambridge Analytica files are about, and their discovery has been made possible, to a large extent, by a young adult, Christopher Wylie.

Without Wylie’s confessions, the public would have known far less about how social networks have been misused, not only to encroach on people’s digital rights but also to subvert democratic processes. Another whistle-blower, famous around the globe, is Edward Snowden (born 1983), whose revelations told the public about NSA surveillance. That Snowden is American, not European, does not diminish his role. It’s interesting that the Guardian (the British newspaper) should write that Wylie was “impossibly young. He was 27 then (he’s 28 now), a fact that has always seemed glaringly at odds with what he has done”. Many digital activists are young adults. They may grasp some challenges better than some middle-aged people, and they know they have to live longer with the consequences, if the wrong decisions are made. 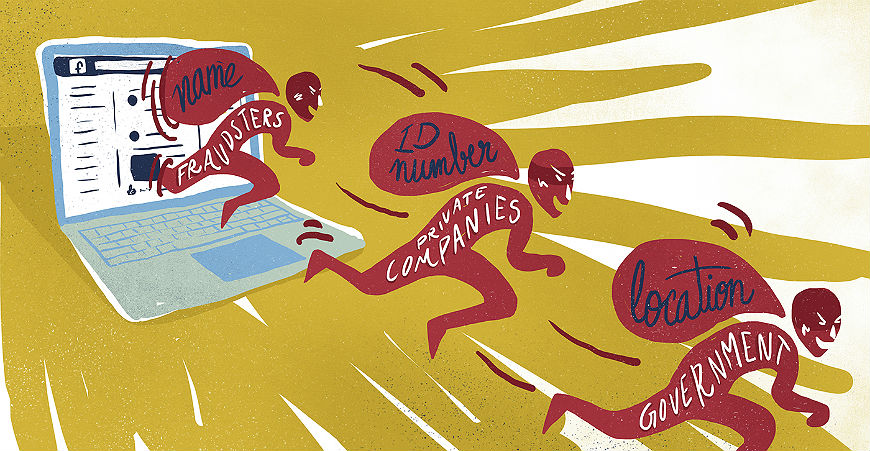 Digital citizenship requires us all to be critically aware and relentlessly demanding. Just as states must strive to keep as much digital sovereignty as possible, in order to be able to protect their citizens’ digital rights, so must citizens be able to act as digital citizens. They must know their rights and possess the agency to defend them. Adaptation cannot be the right answer to trends which carry the risk of market power and concentration the likes of which have never been seen, even in the late 19th century. We must all engage each other in critical reflection. To this end, the text of this article has been discussed with a privacy lawyer who is older than me; a colleague from my own age group who used to be a professor of computer science; a young privacy lawyer in a private company consultancy practice; a young scholar from the history of science doing research on artificial intelligence; my wife, who is a teacher; and our three children aged 17, 15 and 12. It has benefited considerably from their combined input. We must all reflect together critically, but the real potential for activism lies with young Europeans. At 50, I was born in the very year that saw widespread youth rebellion – 1968 – and I am thus neither a baby-boomer, nor a millennial, but exactly in between. When I was at university, we had just moved on from Dos to Windows (readers unfamiliar with the joys of Dos may wish to peruse this article. Perhaps this offers me an attractive vantage point? I would like to think so.

Disclaimer: opinions expressed in this article are strictly personal and do not represent the official positions of the European Commission or the European Union. 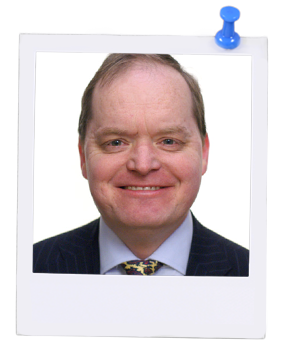 Jacob works at the European Commission, Youth Unit; he writes here in a personal capacity.