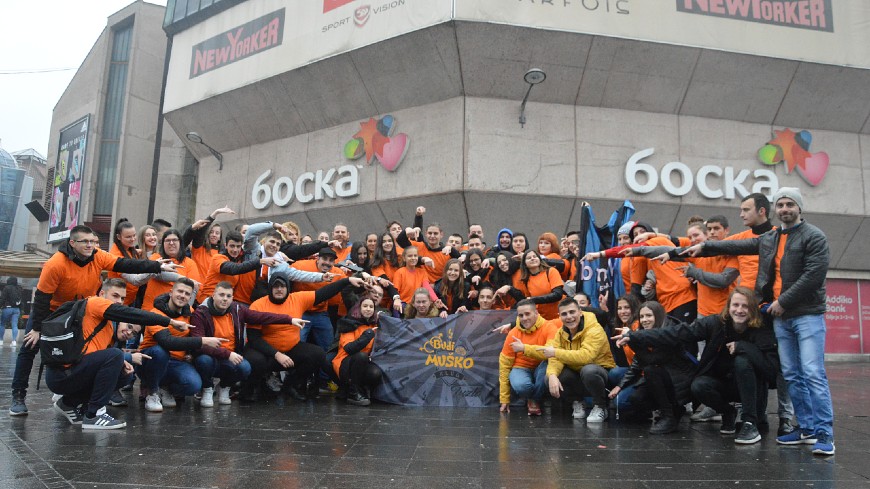 To “Be a man” – in rural Bosnia and Herzegovina

Founded in 1998, the PRONI Centre for Youth Development works with and through young people to build a decent and democratic future for Bosnia and Herzegovina. Headquartered in the Brčko District but now operating across a wider spatial arc, PRONI has achieved a track record of demonstrated effectiveness as a catalyst for civic engagement. Its strategic approach gives pride of place to youth empowerment and grass-roots problem solving. PRONI’s multi-ethnic staff have equipped and encouraged a generation of activists to get involved and make a difference at the local level.

From the Coyote editorial team, Marinela and Mark interviewed Jasmin Jasarevic about his engagement, key experiences, vision and how PRONI has worked with the “Be a man” programme.

Jasmin, you have been involved with PRONI in Bosnia and Herzegovina right from the beginning – why did you start and what keeps you there?

My involvement started in 1998 and I can say now, after 22 years, that I have no regrets dedicating more than half of my life to youth work development in Bosnia and Herzegovina. As a young man, at that time, the vision and the idea of PRONI Centre for Youth Development just suited me right – as for most of the youth living at that post-war time in Bosnia and Herzegovina. The idea of PRONI is peace building, reconciliation, equality, activism and global citizenship and, at that time and now, those were the ideals that I personally share and it was not hard for me to stay all the way.

How much is masculinity in rural areas of Bosnia and Herzegovina socially constructed and conditioned by tradition? What makes a man in a rural area? 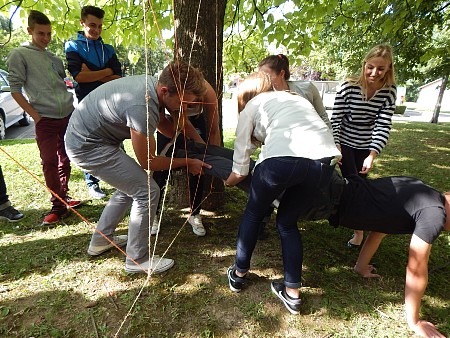 As in most of the post-socialist countries, the “traditional” way – meaning “man” way was deep in the roots of our community social norms and standards, and especially rooted well in rural areas of Bosnia and Herzegovina society. To be a man has always been seen as one that keeps the family name and, in short – to be responsible for the family. It is a habit here that when you introduce yourself to another man, then he will ask you about your father’s name. That says a lot about the situation we were all growing up with. In terms of our youth work activities it means that our activities always needed to be equally distributed and contain “girls” and “boys” activities, where “girls” activities were art, dance and creative while “boys” activities were sport, outdoor and computers. Our educational activities were from the beginning visited 50/50 by young men and women.

Who is affected by it and what are the consequences?

The rural youth were somehow “divided” due to the fact that boys will go out and play football while girls will stay home and have less social interactions and that is recognised, as one of the potential benefits, of having a youth work education and PRONI youth clubs in rural areas. Beside this, the main reason for opening the youth clubs in rural areas was the fact that young people from rural areas had limited access to non-formal education, travel, information, participation opportunities and other chances and opportunities that were available to the young people living in Brčko city area. At that time some of the girls from the rural areas of Brčko were coming to PRONI youth club in Brčko town and, later on, to PRONI Youth Centre, but the boys from rural areas were not so easy to get to indoor youth activities and they were coming only to sport and outdoor activities (like camping and Scouts). PRONI practice, from the very beginning, is to have two youth workers per youth club and we make sure that those teams are gender balanced so we always have a female and male working in a youth club.

Tell us more about the “Be a man” club initiative (who started it, why, what is it all about, where does it exist?). 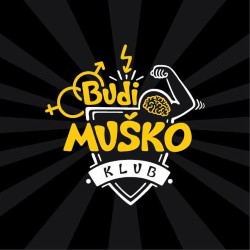 “Be a man” initiative was developed by CARE International NW Balkans and its collaborative partners from Western Balkans countries that focus on addressing gender inequalities, harmful health practices and violence in everyday life with young men and young women aged from 14 to 19 in schools and the community. PRONI is one of the implementing partners that organises activities with groups from the Technical High School at Brčko. Other “Be a man” initiatives are implemented in 18 more different towns and municipalities in Bosnia and Herzegovina.

What are the main achievements and concrete examples of how the initiative makes a change?

This specific programme is focusing on young men’s attitudes and has great results in decreasing their violence towards women and violence in general. They become less homophobic and develop more open ideas on what it means to be a man.

And what are the main challenges that the club faces? How does the rural community react to it? 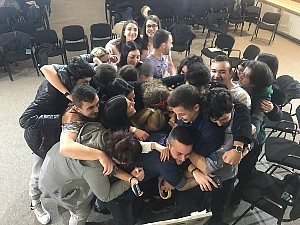 The main challenge to the existing youth clubs network in Brčko District of Bosnia and Herzegovina is the “brain drain” or just simple youth migration, meaning that out of the 26 existing youth clubs in Brčko District rural and suburbs – two of them closed last year due the lack of young people that are living there. Those were two small rural communities and now we have an opportunity to open two more youth clubs in rural areas where there are a huge number of young people. The fact that there are few rural communities that express interest in having youth clubs in their village says a lot about the recognition of the importance that PRONI youth clubs represent to that local community.

How do you get men to fight against gender stereotypes? How do young men from rural areas react to your initiative?

PRONI activities, in general, and in youth clubs are designed to work on principles of equality, inclusion and openness and as such we are putting both gender and all others together and work towards finding the common goal – that is often personal growth and societal development. In more practical terms, and related to our youth clubs’ activities, there is an example where the computers and table tennis in youth clubs were “exclusively” dedicated to boys. That’s how it started in the beginning, and we have boys “occupying” computers and table tennis and girls were not even considered to share time dedicated to the use of these two opportunities in youth club. During the time frame of 6-12 months, the girls get encouraged by our youth workers to play games on computers and play table tennis – in the beginning with the youth workers and, in no time, they gain the skills and confidence to challenge the boys from the youth club. It’s so much fun watching this process and observing the boys’ reactions when they lose a match against the girls, and getting them to understand what equality is and watching them want to be in a team where the most skilled girls are playing.

What is life like for young people who do not see life only in terms of male or female gender roles?

As I said before, PRONI is always making our doors open for all people regardless of their gender role and we were often the only place where people that don’t associate to specific gender roles were welcome. But, in general, the situation for those young people is still far from good and more initiatives like “Be a man” should take place.

To what extent have you been able to co-operate with other organisations or institutions in this initiative? 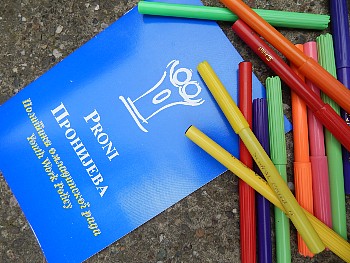 What does the future bring for rural youth?

According to our experience, so far, there are many more challenges when it comes to working with rural youth and rural development in general. The infrastructure and access to basic human rights are challenging or non-existent and opportunities for rural youth are limited. The second challenge is the fact that young people are leaving the rural areas in search of education or jobs elsewhere. The youth clubs and youth work can give part of the answer and equip the rural youth with skills, knowledge and make some positive attitude changes, but there are a limited number of organisations that are working in rural areas in a structured and organised way. In a way, this is also an opportunity for all of us who want to work with rural youth to give additional effort and open more youth clubs in rural areas or start projects and programmes such as the “Be a man” initiative.

Thank you, Jasmin, for your thoughts and time!

Much luck and success in the future! 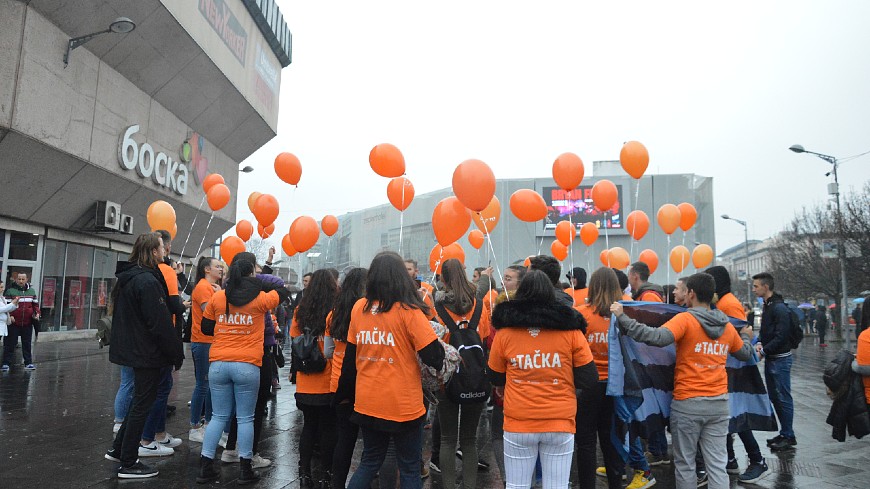 Mapping rural youth realities.
How are they moving forward? 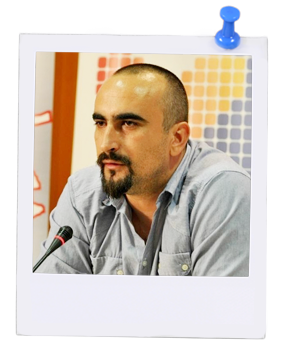 Jasmin is an experienced youth work practitioner and social innovator.