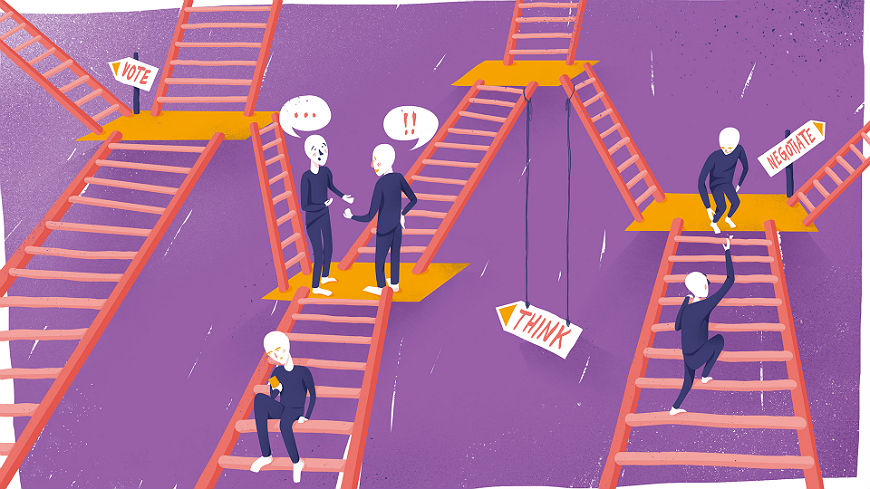 What will be the next ladder of youth participation?

Painting a doom and gloom portrait of European democracies is an easy task. The rise of nationalism and populism as expressed in recent elections, the shrinking civic space through restrictions imposed on the freedom of association and peaceful assembly, the threats to the social fabric through decreasing levels of trust at all levels of society are traits that are causing concern in many European countries. The alleged civic apathy of young people usually completes this negative picture.

Every activist in the youth field knows that, while there is some undeniable truth behind the first elements, the alleged lack of engagement by young people is a clash of representations. It is a clash between the representation of youth participation based on young voters’ voting behaviour and the shape-shifting reality of young people’s active participation in recent years.

In a fragmented, individualised, globalised and increasingly complex world, young people have rapidly shifted away from the main form of participation that older generations were most acquainted with: the once-every-few-years vote for a political party. This shift has been accompanied with the development of more and more diverse forms of participation based on new needs, competences and motivations of young people. When speaking about new forms of participation, digital engagement obviously comes to mind. For example, the success of rapid response campaign platforms such as Avaaz, Change.org or SumOfUs is particularly worthy of note. Such platforms offer targeted cause-based opportunities, they promise fast results, they allow fluid movement and transfer from one cause to another, and they embody the local-global connection. They reflect the individualisation process of our societies, the multilayered identities increasingly felt and experienced by more and more young citizens, the general growing short-termism in perspective and possibility, and of course the new opportunities offered by new technologies.

While voting in elections on the one hand and rapid response campaign platforms on the other are clearly two extreme ends of the participation spectrum, they are nonetheless both part of the same continuum. This continuum is composed of myriad actions and activities firmly embedded within the definition of participation advanced in the Council of Europe’s Revised European Charter on the Participation of Young People in Local and Regional Life. This states that

participation ... is about having the right, the means, the space and the opportunity and where necessary the support to participate in and influence decisions and engage in actions and activities so as to contribute to building a better society.

Many different activities, including voting, donating to charities, co-managed youth councils, engagement in traditional NGOs, online activism through rapid response campaign platforms, therefore, all lie on this continuum of forms of participation. It is important, however, to keep in mind that while they lie within the basic definition of participation, they are enshrined within a multidimensional, rather than a linear or stepwise continuum, thereby allowing for many different possible categorisations. The classical reference point for participation is doubtlessly Hart’s famous “ladder” of youth participation but its unidimensional nature no longer captures fully the reality of youth participation (if it ever did).

A resource-based classification of forms of participation

Decision makers and practitioners also need to envision the multiple forms of participation under the perspective of the resources needed to “activate” them. For a young person to be able to access and engage through any form of participation, several types of resources must be gathered: physical and/or online spaces, material, time, financial resources, human resources, political will and support (from decision makers), competences and motivation (from young people). Each form of participation, through relating to such a resource-based approach typology and while being put in perspective with its outcomes, can then be subjected to a practical mapping and a possible evaluation of the reasons for success or failure. 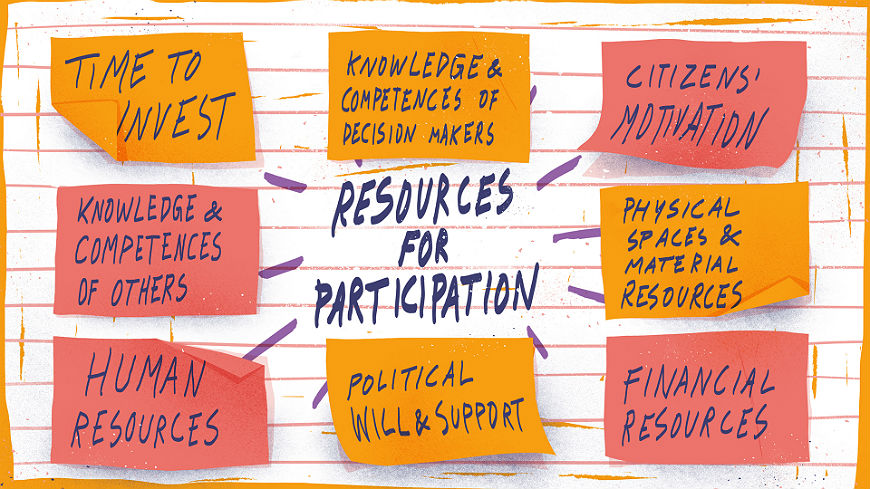 The consequences of the lack of knowledge and understanding of the new forms of participation, both at institutional and societal levels, are manifold.

The first is that our education systems are poorly prepared to equip young people with the right set of skills, knowledge and attitudes to fully embrace the diversity of forms of participation. The work of the Council of Europe Education Department on Competences for Democratic Culture is, in this respect, both pioneering and highly significant. It paves the way for a necessary overhaul of the way we teach civic and active citizenship education to young people all over Europe.

As a corollary, not only our education systems, but also to some extent other well-established participation spaces, are not yet fully prepared to integrate these new forms of participation into their practices. They quite often lack the knowledge to create new opportunities for participation, through the development of new physical and online spaces, and to allow more time for it. It is crucial that from school to the workplace, young people are offered the time and space to engage when their motivation and competences are prepared for participative action.

Finally, this lack of understanding is, in part at least, a product of the absence of legitimacy and insufficient recognition of many forms of participation, and the creation of a value-ladder of forms of participation. While voting is considered an important civic duty and running for political office carries a stamp of prestige, volunteering for a local grass-roots project, through for example working in a non-profit bike repair shop, might well not be perceived as being of the same value in terms of participation. This lack of legitimacy can serve to reinforce the inertia discussed above, in schooling and wider aspects of young people’s lives, around promoting and defending time and space for a spectrum of participation.

The conclusion that there is a gap between theory, policy and practice at different levels when it comes to the future of youth participation is therefore not a hard one to draw. Finding solutions to bridge this gap is a much harder endeavour. The role of the youth partnership becomes clear under this light. The partnership must continue playing its role as a “gap-bridger” between different stakeholders and different worlds that are not naturally communicating with each other. The future of the youth partnership lies doubtlessly in the inclusion of new structures that already have a successful track record of understanding new drivers for youth participation. For example, the civic-tech ecosystem, where many social businesses are flourishing, should be seen as a legitimate stakeholder to involve, alongside more established and traditional structures. My concluding remarks are intended to frame some additional questions that you, as a policy maker, researcher or practitioner, are probably already asking yourself in one way or another, but which I believe are relevant to feed the debate about the future of youth participation:

These three questions are mirroring the doubts felt by established structures, representing the old forms of participation. These structures legitimately believe in the need for long-term collective action, but are struggling to engage young people in their actions.

Do we still need to invent or is it time to make more concerted effort to share and spread? Forms of participation have become extremely diverse, and their implementation at all levels even more so. Successful initiatives for all target groups in all contexts exist. The dissemination work that the Council of Europe, in particular through the youth partnership, carries out is of the utmost importance. But all stakeholders must share the same innovation-sourcing and disseminating mindset. Youth participation has moved a long way since Hart. New thinking, perspectives and conceptualisations are required. This is a contribution to that debate. Valentin is a European youth activist, currently busy travelling the world for a year.