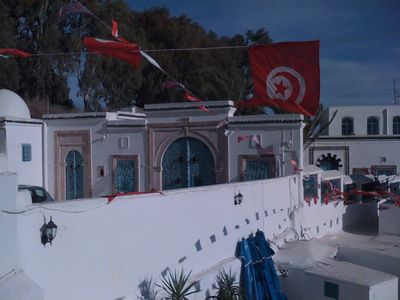 In 2005 the EU-CoE youth partnership, together with several national and regional partners, initiated a process of youth policy cooperation in the broader Euro-Mediterranean region, with a view to fostering greater cooperation between youth policy stakeholders.

The process of youth policy co-operation has inter alia significantly contributed to the recognition that co-operation among institutions responsible for youth policy (public and private) is essential to intercultural dialogue and to the Euro-Med projects in which young people take part.

Youth policy activities have also, undoubtedly, resulted in an expansion of  partnerships and co-operation with a variety of institutions concerned by the empowerment of young people in the MENA region, including the League of Arab States, UNFPA, the World Bank and British Council. In this respect, too, the EU-CoE youth partnership is playing a leading and innovative role.

In reaction to the political changes in their Southern neighbouring countries, both, the European Union and the Council of Europe are strengthening their efforts to support these developments towards democracy. Young people in Egypt, Tunisia and other parts of the South-Mediterranean hold the key to the sustainable and peaceful development of their societies based on human rights, democracy and the rule of law. Understanding and taking into account their expectations and needs is crucial for all the institutional stakeholders, such as the League of Arab States, national youth policy authorities and youth organisations. The experience of young people from the Diasporas in Europe and their role in and perception of recent developments can also positively contribute to this process.

The symposium has been co-organised by the partnership between the European Commission and the Council of Europe in the field of youth, the League of Arab States, the Tunisian governmental authorities, the North-South Centre of the Council of Europe, the Euro-Med Platform, the United Nations Population Fund and the European Youth Forum. It followed the invitation from the Tunisian authorities to host the symposium in Tunisia and hereby give an impetus to the revision of national youth policies in the country.

Background of the symposium

The South-Med youth policy cooperation of the partnership between the European Union (EU) and the Council of Europe in the field of youth, the League of Arab States (LAS) and other actors started in 2005. The cooperation aims at developing a common understanding and exchange of ideas on specific issues of concern for youth policy in Europe and South Med region. Since 2006, other national and international stakeholders of youth policy in European and South Med countries have become involved and extended the framework of this informal cooperation. The activities undertaken brought together youth researchers, governmental institutions responsible for youth policy and non-governmental youth organisations in European and South Med countries. Among other results, this cooperation has supported the process of the Euro-Arab Coordination Meeting of Youth Organisations (EACMYO), created possibilities for direct exchanges between South Med and European youth leaders through relevant youth fora, and provided opportunities for capacity-building of civil society youth organisations through training courses on human rights education, intercultural dialogue and youth participation. These activities have also greatly contributed to the objectives of intercultural dialogue and exchange among its different partners and stakeholders The possibility to meet and learn about and with each other is an essential component of dialogue in the same way that cooperation ought to be built on a genuine desire to go beyond stereotypical mutual perceptions.

The process of changes brought about by the "Arab Spring" in various countries provides the context and drives the need for re-visiting this cooperation so as to respond to all stakeholders' expectations and to ensure a long-term perspective. As a first step in this direction, a seminar on "Empowerment of youth organisations and youth-led civil society initiatives in the South-Mediterranean framework" was organised in Malta with the main aim of providing youth non-governmental organisations and stakeholders with the opportunity to reflect upon recent developments and their implications for the empowerment and participation of young people.

In the context of this event the following issues have been repeatedly raised by young Arab leaders:

In light of these statements, this symposium aims to  raise awareness and  establish understanding of needs identified by young people in Malta, by supporting a structured dialogue between civil society, policy makers and international stakeholders.

The exchange on future cooperation is being taken up and continued by two events: the Euro-Arab and Mediterranean Youth Leaders Meeting: Networking and Partnership Development (Rome, 7-12 May 2012) organised by the European Youth Forum and the Italian National Youth Council as well as by the League of Arab States Youth Forum and 4th Euro-Arab Meeting (Ramallah/Palestine, 2-7 July).

The events in a number of countries in the Arab region since the beginning of 2011 have imposed a new perception of young people's capacities and aspirations. As crucial actors in the processes of political changes, young people have stood up for more freedom, equality and justice. But they also stand up for better future perspectives in education and work, economic and social development.

Young people have legitimate aspirations to be listened to and respected, and to participate in decision-making about their present and their future and that of their nations. Youth is demanding a voice in the transition process towards real democracy. The new political environments need to take into consideration the strong civic engagement of young people. Similarly, the role and organisation of youth policy needs to be reviewed. International youth policy cooperation has also an important role to play.

At the same time, in many countries all over the world, young people are paying a high price for the financial and economic crisis affecting their societies; youth unemployment rates have risen sharply since 2009 and the foundations of the welfare states are being shaken in several European countries. Many young people are growing up in Europe with the perception that their living standards will be lower than that of the preceding generation. The "indignados" movements, very much inspired by young people in Tunisia and Egypt,  may be considered the tip of the iceberg of social movements. The new realities the crises call for a review of political processes and practices in favour of more equity, social justice and democratic governance.

Despite the obvious differences between the Arab and European regions, it is clear that both are affected by consequences of globalisation processes. The massive spread of global communication, and particularly social media, has become a new and powerful vehicle for young people to get organised and participate.

The processes of change seem to have been triggered by economic, social and political conditions perceived as unbearable and unsustainable by some young people. Social media have been a vehicle, catalyser and facilitating factor, but it is people, especially young people, who have been the main factors and actors.

Eastern European countries have a recent history of engaging in political transition processes towards democratic societies. Their experiences with regard to the construction of democratic societies and the development of citizenship and participation cultures can provide an enriching background for the current events. Youth organisations in Europe might be interested to learn from the efficient use of social networks and online media by youth organisations in the South-Mediterranean region.

In reaction to the political changes in their Southern neighbouring countries, the European Union and the Council of Europe are strengthening their joint efforts to support these developments towards democracy. Young people in Egypt, Tunisia and other parts of the South-Mediterranean hold the key to the sustainable and peaceful development of their societies based on human rights, democracy and the rule of law. Understanding and taking into account their expectations and needs is very important for all the institutional stakeholders, such as the League of Arab States, the United Nations Population Fund (UNFPA), national youth policy authorities and youth organisations. The experience of young people from the Maghreb diasporas in Europe and their role in and perception of recent developments can also positively contribute to this process.