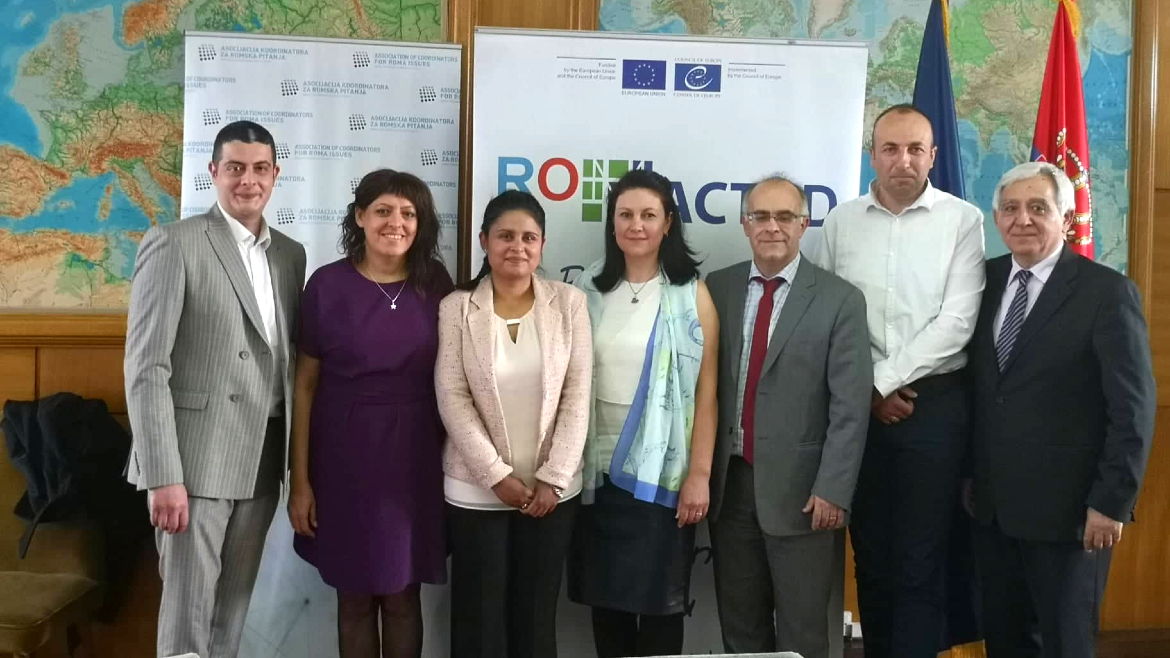 The First Advisory Group Meeting of the joint EU/CoE ROMACTED Programme took place in Belgrade on 30 May 2019. The event brought together the main relevant stakeholders at national and local level, the representatives of 11 local authorities and Roma communities, French Embassy in Serbia, Delegation of European Union to Serbia and Council of Europe, to discuss the progress of the ROMACTED Programme in Serbia to date, receive information on the current advancement and provide recommendations for the upcoming implementation period during 2019.

Mr Tobias Flessenkemper, Head of the Council of Europe Office in Belgrade highlighted the fact that the ROMACTED Programme is an integral part of in the process of strengthening local self-governments in Serbia, with a special emphasis on participation of Roma communities in decision-making processes at local level.

Mr Nenad Ivanisevic, Advisor of the Zorana Mihajlovic PhD, Deputy Prime Minister and Minister of Construction, Transport and Infrastructure, and the member of the Coordination Body for Monitoring the implementation of the Strategy for Social Inclusion of Roma, emphasized the role of the ROMACTED in realisation of the Strategy and contribution in strengthening the local self-governments and enhancing responsible governance. In the light of the newest Annual Progress Report of the European Commission for Serbia, Mr Ivanisevic highlighted the coordinated activities that have been organised through ROMACTED Programme. Cooperation between Republic of Serbia and other relevant international and national stakeholders substantially contribute to the progress towards the European Union membership.

Ms Mirjana Maksimovic, representative of EU Delegation to Serbia, highlighted the fact that ROMACTED is implementing jointly with the Council of Europe and financed under the IPA Funds, with the main role of exchanging experiences between local self-governments from the Western Balkans and Turkey.  As different local communities face similar challenges, accent in the future will be on cooperation of local government units, their responsibilities but also opportunities, with the goal to improve position of Roma citizens on their territory.

Mr Dragan Gracanin, ROMACTED Focal Point for Serbia, provided the national perspective of the implementation of the programme, reminding of four main methodological steps and main achievements.  Ms Vera Kurtic, ROMACTED Project Officer, announced future steps in the implementation and the upcoming small grants scheme that will be soon launched in the framework of the programme.

Representatives from 11 ROMACTED cities/municipalities, both from the local authorities and Roma communities, presented main achievements at the local level, which are based on priorities identified directly by the communities. There are totally 11 local lists of priorities with 58 short-term and 63 long-term priorities in the field of infrastructure and housing, education and employment, health, culture and sport. Furthermore, local representatives expressed main challenges of the implementation, as well as different strategies that have been applied in that regard.

The final words at the meeting were given by Ms Natalija Matunovic Milosevic, representative of the Standing Conference of Towns and Municipalities, who elaborated more on strong synergises between the two programmes and cooperation.

Ms Dragana Jovanovic Arijas, Manager of the Social Inclusion and Poverty Reduction Unit, highlighted the importance of sustainability of the action and reflections to a daily life of Roma community.

Ms Ljiljana Bekcic, Advisor of the Minister for of Public Administration and Local-Self Government, drew attention to the recently adopted laws, which aim at ensuring an adequate representation of members of national minorities.

In the framework of the French presidency of the Council of Europe`s Committee of Ministers, Mr Nicolas Faye, Deputy Ambassador of France in Serbia, stressed that the main goals of the French Presidency are to preserve and strengthen the European system of human rights protection. Mr Faye announced the opening of the Agency for Development for Social Inclusion in Belgrade by the Republic of France.

Ms Irina Sahakyan Vetter, Deputy Head of the Council of Europe Office in Belgrade, reminded on important international treaties and international recommendations to Serbia. She also stressed on importance of synergies between all present programmes in Serbia i for collection of best practises and lessons learned.