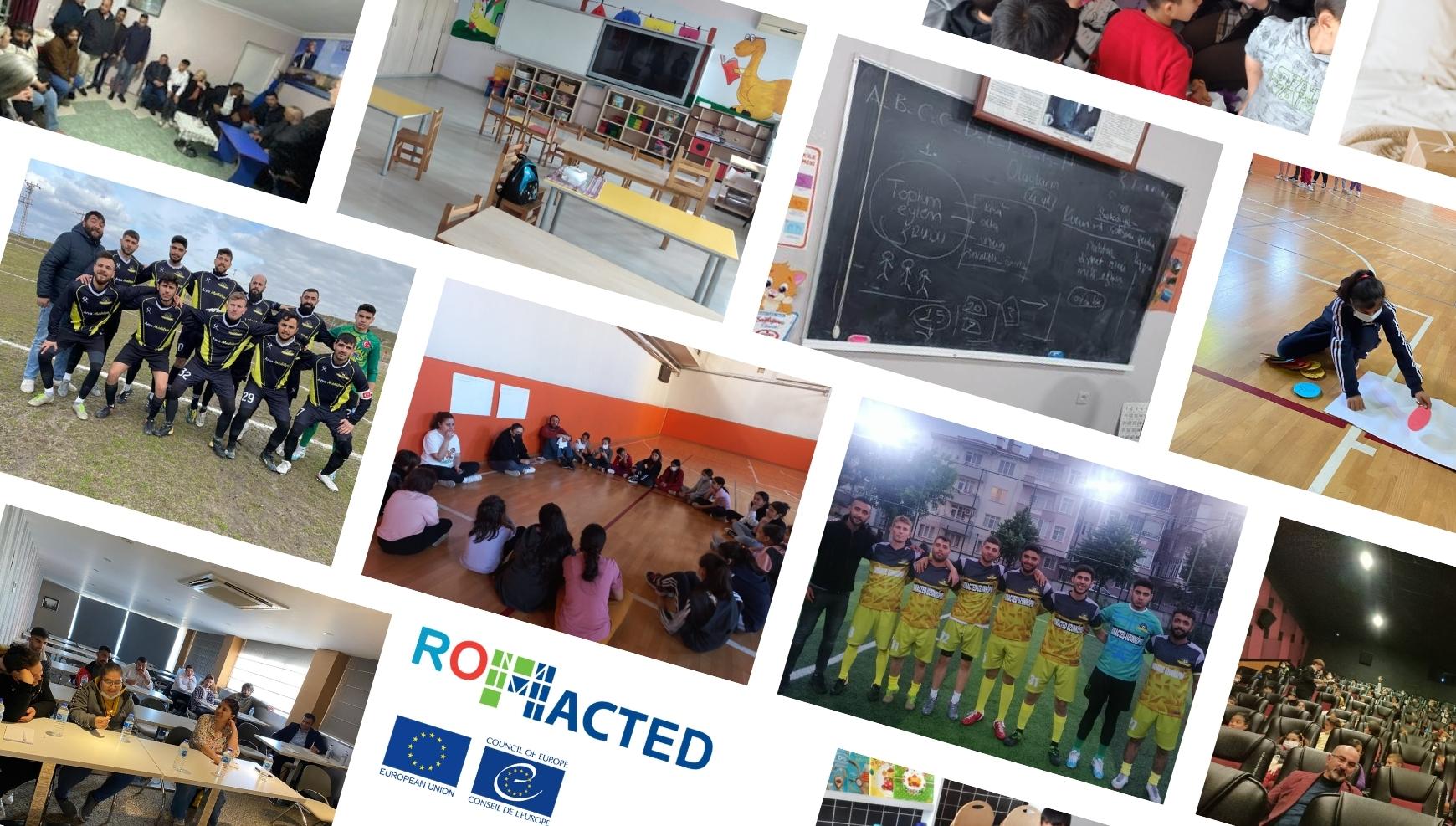 During the previous months, ten ROMACTED facilitators have been actively interacting with the Roma community in the field. Community Needs Assessments were prepared as a result, identifying the real needs and priorities of the local Roma community. On average, 20 community members are part of the CAG dynamic in the pilot municipalities, with the approximate participation of eight women per group.

Some of the milestones are available below

During the European Parliament Roma Week in Brussels, the Mayor of Edirne received the Most Roma Friendly Mayor prize for 2022.

In Edirne, one CAG member successfully passed the entry exam into university and registered at the school of physical education and sports. Furthermore, he became a coordinator of ROMACTED Children`s House, established in ROMACTED Phase I.

The 98 pupils who dropped out of school during the first waves of the COVID-19 pandemic have benefitted from supplementary classes. Trakya University volunteer educators and students provided these courses in partnership with Edirne municipality and ROMACTED Programme, and with the support of the Children's Rights Association and Roma Youth Association.

In Uzunköprü, the Roma youth football team received sponsorship at the annual municipal football tournament. The Municipality of Edirne and the ROMACTED Programme contributed to provision of 17 uniforms. The team ranked 3rd among the 64 teams.

For the first time, International Roma Day was celebrated in Uzunköprü with the support of the ROMACTED Programme. Field visits and a symposium were organised with the participation of the wider community.

The Romani language is widely spoken/used in Uzunköprü. For this purpose, a documentary, "Don't let the Romanes language disappear," was created by Roma NGOs and it will be broadcast this year.

While the community service centre has been made functional, 18 elderly women's care services courses were offered in the municipal hospital.

The report on Social Security of Roma people (working without social insurance) was prepared by ROMACTED facilitators and presented to the Turkish Parliament. Experts from the Ministry of Labour and Social Policies started work on the legislative proposal, which will be submitted to the General Assembly of Türkiye after the summer.

Four Roma football teams were established, although being in a precarious economic situation. Efforts are made to allocate resources to the teams from the Ministry of the Interior/ the General Directorate of Civil Society. The needs include infrastructure, supply of jerseys and technical equipment, transportation support for participation in tournaments, support for human resources, and other essentials.

The opportunity to continue vocational training was offered by the Ministry of National Education and announced at the CAG meetings in January 2022. The members were encouraged to apply. As a result, a female CAG member benefited from this opportunity and shared that “she dreams of becoming a hairdresser”. Hence, she registered in the section for hairdressers and got employed as a hairdresser within the programme.

The Ministry of National Education has implemented the "10,000 Schools in Basic Education Project" to reduce success and opportunity gaps between schools and to strengthen equality of opportunities in education. The goal is to open 3,000 kindergartens and launch 40 thousand nursery classes within a year. One of the decisions during the IWG meetings was to place Roma children aged 5-6 in this class. As a result of the work carried out by CAG Members in Hacı İshak Neighbourhood, 5-6 children were registered to school.

At the IWG meetings organised within the Akhisar municipality, it was decided to prepare a project proposal that would target employment opportunities for Roma women and establishing markets where the social and basic needs of poor citizens (Roma included) are met. Numerous ideas were expressed, such as having assembly centres in every neighbourhood, providing employment opportunities for six people in each centre, providing clothes to those in need through social stores, requesting donations from the business sector, creating opportunities for those who want to barter, and considering different activities that generate income for these centres. The Research and Development Unit will prepare the proposal and to seek co-financing. The minimum duration of the project will be two years

Akhisar Municipality is also trying to implement a social housing project for Kayalıoğlu Roman District. Even though the work is in the initation phase, the parcelling and zoning tasks commenced. This development is a tangible output of the 1st CAG meeting.

A 6-person CAG has had one-on-one meetings with the district governor and the mayor to search for tangable solutions to priorities identified in the Community Needs Assessment. To date, one youth CAG member with special needs and one female CAG member was employed in Karadeniz Ereğli Municipality.

The preliminary preparations have been completed for the kindergarten and community centre in the Hamzafakihli neighbourhood. Hamzafakihli elementary school received various visibility items (promotional material) such as school bags, pens, pencils, notebooks and primary and intermediate class educational books, with support from other Council of Europe projects.

Preliminary preparatory work was carried out for a multi-purpose community centre in the city centre and an area of 50 square meters was used by CAG members on certain days.

On International Roma Day, an iftar dinner was organised for the Roma community which was followed by a celebration.

Local NGOs were brought together to assess the needs and priorities of the Roma communities. Raising awareness of non - Roma groups about the Roma issue was substantially increased. As a result of this initiative, inclusive social policies are initiated in Gömeç.

Since the facilitator is a member of the Municipal Council, the level of political awareness in the community was raised, especially in this municipality. Cooperation within the community has been achieved through the harmonization of different political views.