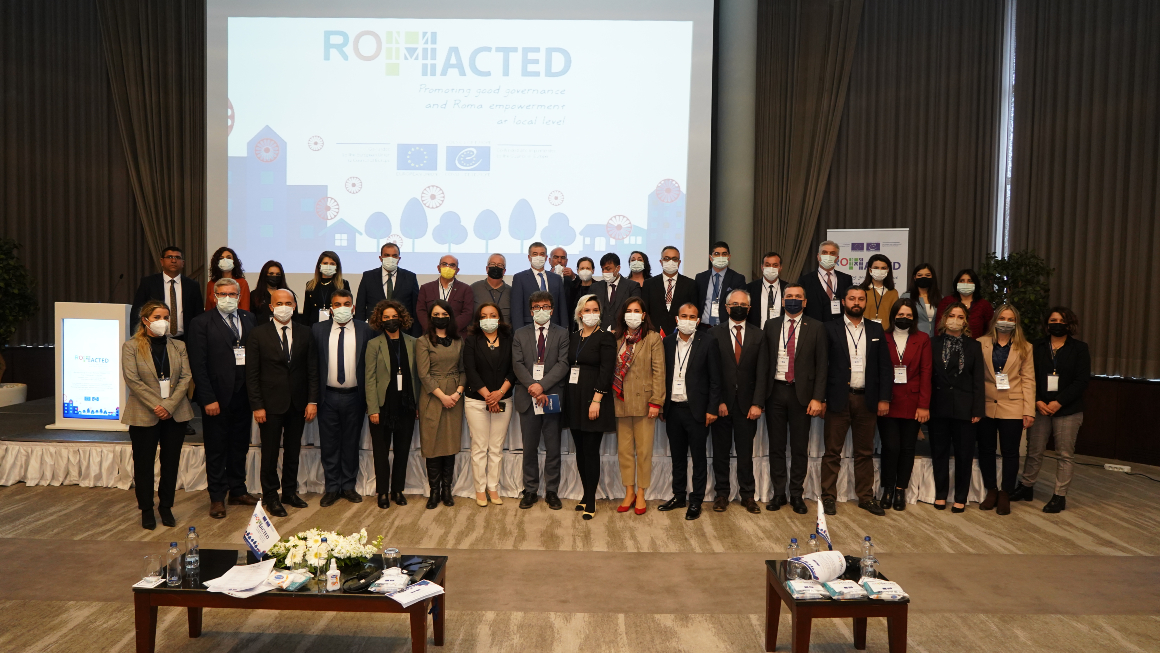 The second phase of the EU-CoE Joint ROMACTED Programme “Promoting Good Governance and Roma Empowerment at Local Level” was launched in Ankara, on 23 February 2022. The hybrid event gathered together representatives of the Turkish Parliament, Union of Municipalities in Turkey, European Commission, the European Union Delegation to Turkey, international stakeholders, and municipal representatives from the partner municipalities in Turkey.

Opening remarks were addressed by the following speakers:

Mr URSE noted that ROMACTED is the first programme of this kind to be implemented by the Council of Europe Programme Office in Turkey, which addresses both the Roma community and local authorities, with the aim of enabling them to work together and identify solutions to structural problems that they encounter.

Mr Angel GUTIERREZ HIDALGO emphasized the concept of active inclusion and the role of municipalities in helping their citizens to actively take part in local decision-making mechanisms.

Ms Marta GARCIA FIDALGO placed the event and the ROMACTED II IPA project in the larger EU Roma integration context. She recalled how encouraging it is to see that this commitment has been now extended to Phase 2 with additional municipalities, with the hope that the European Commission and Council of Europe could together achieve even more comprehensive milestones in the joint work for a more meaningful Roma integration in Turkey.

In the thematic section on “Local participation of the Roma community in Turkey”, Mr Cemal BEKLE, Izmir MP of the Justice and Development Party (AKP), highlighted the intention to move forward with ROMACTED II in parallel with the current Roma strategies and action plans in place. He underlined that, “we see Roma inclusion beyond politics. We have worked together for the same purpose”. He also highlighted the support given by the government to the implementation of the programme and noted the importance of expanding its implementation and outputs to further provinces and municipalities, to ensure that any Roma community in Turkey can also benefit from this opportunity.

In the same session, Mr Yüksel TAŞKIN, Deputy Chairman for Social Policies of the Republican People`s Party (CHP), highlighted the importance of social democracy and its intersection with the “participatory approach” as a guiding path, which will be enhanced by ROMACTED II. He also emphasized the benefits of the projects, particularly of those which support the empowerment of Roma people with the contribution of local governance. In this context, he reiterated the promotion of bottom-up acceleration in line with the subsidiarity principle, as well as the enhanced participation of communities in accordance with the objectives of the programme.

The representatives of seven municipalities were present and signed the Memoranda of Understanding with the Council of Europe: Akhisar/Manisa, Canik/Samsun, Edirne, Gömeç/Balıkesir, Konak/ İzmir, Muratlı/Tekirdağ, and Şişli/Istanbul.

Lessons learned from Phase 1 were presented through the contribution of Konak and Edirne municipalities, including the challenges that the Roma population is facing, as well as the activities and work undertaken in Phase 1 of the programme.

ROMACTED Phase II will continue to assist the local authorities to integrate Roma specific dimensions/measures into the mainstream local policies, action plans related to these policies, and public service delivery, thereby enhancing democratic participation and empowerment of local Roma communities. The Action is ensured by the Council of Europe Programme Office in Ankara and the Support Organisation “Zero Discrimination Association” under the established political partnership with the Union of Municipalities in Turkey (UMT).