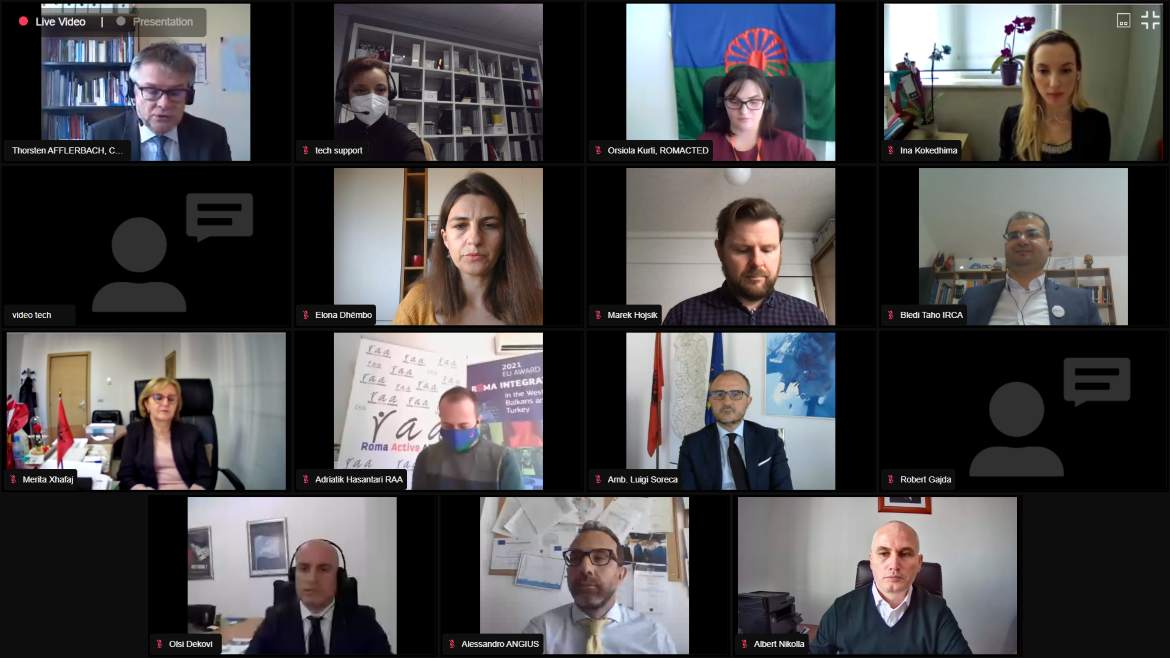 Today, on 8th of April 2021, International Roma Day, a virtual public debate was organised on “Combatting Antigypsyism: A Forward-looking Perspective in Albania” within the framework of the joint European Union and Council of Europe ROMACTED Programme, and in cooperation with the Ministry of Health and Social Protection and European Union Delegation to Albania.

The event aimed to commemorate the 50th Anniversary of the First Romani Congress held in London in 1971 and celebrate International Roma Day, a day to celebrate Romani culture and raise awareness of the challenges this community is facing across Europe, as well as stimulate the institutional and public debate on the need for combatting antigypsyism and bringing it closer to citizens in Albania.

The public debate gathered together representatives of central government, local authorities, equality bodies, Roma civil society organisations, and international organisations including the European Union and the Council of Europe.

Mr Luigi Soreca, Head of the European Union Delegation to Albania, underlined: “On the occasion of International Roma Day, I want to bring a message of friendship and support, on behalf of the European Union, to our Roma and Egyptian friends. The pandemic has exacerbated the difficult living conditions that Roma and Egyptians face in Albania and has increased the deep-rooted discrimination against this community. The EU condemns all forms of stigmatisation, “ethnicisation” and antigypsyism, which are contrary to EU values and against the basic principles of democracy”.

Mr Albert Nikolla, Deputy Minister of Health and Social Protection, put emphasis on the need that Albania, as a European country, needs to respect minority rights, being also a precondition for EU membership status. “Racism against Roma, the accumulated discrimination over time, and stereotypes and prejudices are present in Albania as in many other countries. This racism has proved to represent a drawback towards the efforts of improving the living conditions of Roma. The lack of willingness to address antigypsyism against Roma and Egyptians in public, social and cultural life, is intollerable. The inclusion process cannot be routine work. A direct and open debate and commitment to fulfill the obligations of the Poznan Declaration and implementation of the EU Roma Strategic Framework for Equality, Inclusion and Participation is needed. Only through this engagement, will it be possible to address antigypsyism and improve the challenges that Roma and Egyptians face in Albania” he said.

Mr Thorsten Afflerbach, Head of Division for the Roma and Travellers Team, in his welcoming remarks, took the opportunity to congratulate the Albanian Ministry of Health and Social Protection about the commitment to acknowledge the importance of combatting antigypsyism and foresee measures how to address it. He emphasised that “as combatting antigypsyism is a cross-cutting and inter-institutional exercise among various stakeholders both at central and local levels, I would encourage local authorities in Albania to commit to the implementation of the local Action Plans for Roma Integration 2019-2022 through setting aside dedicated funds in their budgetary programmes that have a direct impact on Roma Integration, such as primary healthcare services, pre-school and elementary education, social care for families and children, unemployment, education and training, and social housing”.

This virtual public debate was organised as a follow up to the support provided by the Council of Europe’s Roma and Travellers Team to the Albanian government, as a CoE member state, to develop a specific chapter on “Combatting Antigypsyism” under the National Action Plan on Integration of Roma and Egyptians 2021-2025 aligned with European Union and Council of Europe international standards.

It was also an opportunity to present the book “Roma legends and tales” by Sead Kazanxhiu supported by the Roma and Travellers Team and launch an informative video spot to raise awareness of the Roma population in Albania concerning their right to vote and participation in parliamentary elections of 25 April 2021.