Peace By Sharing: transmission of history to young generation 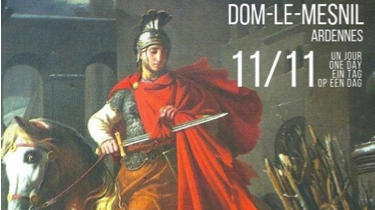 November 11th is the day French people commemorate the Armistice of the First World War. It is also, since centuries, the Saint Martin’s day. The Saint is celebrated in all Europe.

The Saint-Martin’s festivity celebrated peace on equitable sharing resources within the context of the commemoration of the Armistice of the First World War. This year’s theme was “Peace and Sharing” and took place at Dom-le-Mesnil (Ardenne).

On this historical day, children transmitted a message of peace through their participation to different activities such as drawing, concerts or competitions. After the official ceremony, children’s drawing were put in the contemporary sculpture “The Shared Mantle” which was inaugurated on the day of the event and that reminds to the world that peace can only be achieved through sharing.

Facebook videos of children’s drawings on the theme of “sharing”: Vdeo 1Video 2Video 3