Call for Contributions to the Factsheets on Romani history and culture 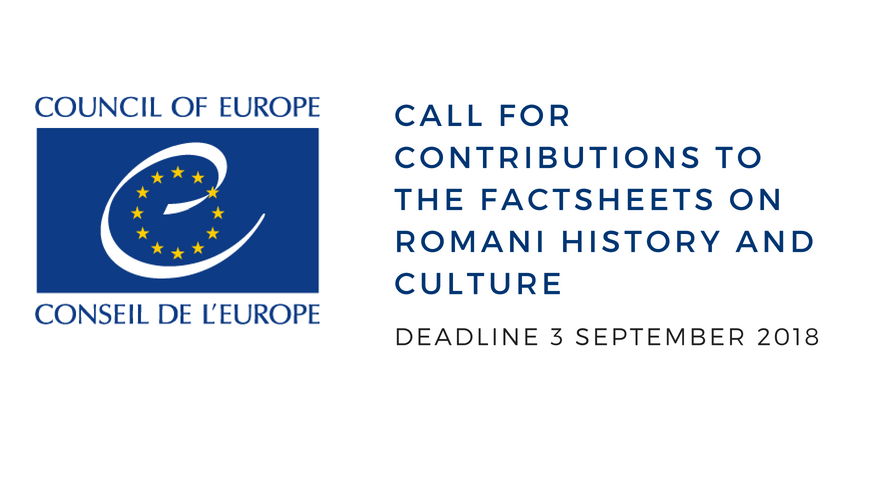 CALL FOR CONTRIBUTIONS to the Factsheets on Romani history and culture

The factsheets aim to provide basic information on the history and culture of the Roma for a wider audience including teachers, students, decision-makers, experts working on topics related to Roma and all others interested in Romani culture and history.

This activity is part of the implementation of Recommendation (2009)4 on the education of Roma and Travellers in Europe of the Committee of Ministers of the Council of Europe. Drawing up fact sheets to assist with the training of teachers ties in directly with several of the priorities set out in the Recommendation, in particular with regard to Section III. Curriculum, teaching material and teacher training

17.  Romani history and culture should be appropriately reflected in the general curriculum, including teaching about the Roma extermination as part of the Holocaust/genocide of Roma.

18.  In accordance with the provisions of the Framework Convention for the Protection of National Minorities (1995) (ETS No. 157) and of the European Charter for Regional or Minority Languages (1992) (ETS No. 148), curriculum and teaching materials should be made available, where appropriate, for Romani and Traveller children (and other children by choice) to learn their language, history and culture.

The work related to education is designed from the intercultural education angle and sets out to provide teachers with the necessary training to deal with culturally diversified pupils; the material relating to the history and culture of the Romani people may be used by all teachers and especially, but not exclusively, by those with Romani children in their classes. The factsheet presentation has been devised with this idea in mind. Each factsheet has an educational use as a means for teacher training, and is also a means of providing information and promoting awareness both for Romani people and other interested users. It must be a tool promoting knowledge, communication, understanding and mutual respect among the different communities. Consequently, the sheets have been drafted so as to satisfy the dual requirement of clarity for as many users as possible, as well as and content quality.

There are several types of factsheets: multi-discipline or global sheets aimed at improving understanding of Romani issues in a broad European context and, for reasons of educational curriculum and more localised interests, national or regional factsheets for individual member states. For instance, a fundamental theme such as the Nazi period in Romani history is covered by complementary “European” factsheets and specific national ones. Some factsheets may concentrate on a specific event of general importance in the history of the Romani people, such as the period of slavery in the Romanian principalities or the Great Gypsy Round-up in Spain.

The factsheets currently cover four main areas: history, culture, language and literature. A number of series are scheduled for each of these main areas, with a set of factsheets, for example in the area of history on origins; policies; the Holocaust period (in Europe as a whole and state by state); factsheets for each state, comprising a section on history right from the earliest archives attesting to the presence of Roma in the state in question, and another on contemporary history, specifying the size of the Romani population, their geographical distribution and their political situation; a series on famous Romani figures; arts and crafts activities; and dwellings. When compiled together, the factsheets will form an encyclopaedia of Romani history, culture and politics which can be further developed.

The need for quality

Factsheets should have an informative character, be written in a popular scientific style and provide an overview of the selected topic based on relevant academic literature. Although based on the best scientific expertise available, the factsheets do not aim to provide an overall scientific and critical description of Romani history and culture.

This call targets experts in Romani studies who aim to create new factsheets on Romani history and culture within the pre-defined framework and structure given by the existing factsheets (see: http://romafacts.uni-graz.at). Proposals for new factsheets will be peer-reviewed.

In addition, suggestions for the correction of existing factsheets on history and culture are welcome. Demands for substantial changes will also be peer-reviewed. In case of positive reviews, the necessary amendments will be implemented by the editorial team.[1]

Prior to the production of a factsheet, authors are asked to provide the following information:

Proposals have to be submitted via email to roma.team@coe.int not later than 3 September 2018.

The outcome of the review should ideally be communicated within one month after receipt of the proposal. In case of positive reviews the author will receive a consultancy contract to produce the respective factsheet under the following conditions:

Please adhere to one of the following limits on length, taking into account that the number of characters includes also the list of literature and a brief (one paragraph) abstract of the factsheet.

Even though the above limits will be followed, authors may be asked to slightly extend or shorten their manuscripts or provide additional illustrations in order to fit the layout of the factsheets.

The author’s remuneration for an illustrated factsheet written in proper English and in compliance with the aforementioned guidelines will amount to €50 (fifty euros) per page; an acknowledgement rather than a fee.

Factsheets must be illustrated by images (e.g. a map, photo, table, figure, graph, etc.) and/or text illustrations (e.g. Romani text sample, quotation etc.). Images must have high resolution (at least 250 dpi) and must be submitted separately from the document file. Illustrations must be numbered consecutively and provided with captions.

Please use the term ‘Rom-‘ according to the following rules:

You must adhere strictly to the format as set out in the style sheet which will be submitted with the consultancy contract.