"Block the hatred. Share the love!” campaign in Serbia highlighted the crucial role of young people in social cohesion 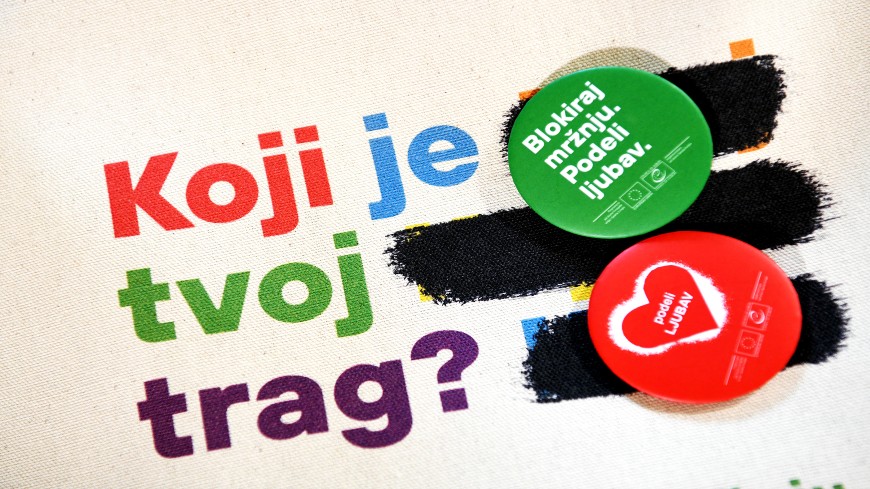 The seven months of the implementation of the „Block the hatred. Share the love!” campaign in Serbia have highlighted the crucial role played by young people in combating hate speech and promoting the cohesion of the society they live in. This was one of the key messages of the final Steering Committee Meeting of the joint European Union and Council of Europe action “Promotion of diversity and equality in Serbia” held today in Belgrade.

“Our social space is increasingly digital. Thanks to the campaign, implemented in co-operation with the European Union, more people in Serbia have become aware of the need to act responsibly in our common digital space. No one wants to see children and young people grow up in the atmosphere of prejudice, resentment and hatred. Our campaign has shown to them that hatred can be blocked. In parallel, young people themselves have been shaping the spaces around them with their messages of love, on a daily basis. One of the lessons from the campaign is that young people want more support and investment in their citizenship and human rights education,” said Tobias Flessenkemper, Head of the Council of Europe Office in Belgrade. “I am also grateful to Belgium, because with their support the Council of Europe will continue working on human rights education for young people next year,” he added.

The aim of the "Block the hatred. Share the love!” campaign has been to combat various forms of hate speech directed at certain communities and individuals in Serbia, especially those from vulnerable and minority groups. It was launched back in May 2022 under the local slogan “What is your trace?”. Since then it has been running online, through social media pages (Facebook; Instagram; Twitter), as well as through public events whereby participants had an opportunity to better understand the importance of countering hate speech, racism, and discrimination.

H.E. Emanuele Giaufret, Ambassador and Head of the Delegation of European Union to the Republic of Serbia stated: “Just because it comes through words, hate speech is no lesser of an attack and bares no fewer consequences. In words or in pictures, online or offline, it is still a form of assault, aggression and unjustifiable act against human rights and freedom. It hurts people, it causes deep human suffering and can easily lead to fatal outcomes. It is nevertheless a daily reality worldwide, speeded up by the online sphere, which requires strong joint efforts of both institutions and individuals to combat it. Serbia is not immune to such reality either with hate speech and discriminatory terminology often used and tolerated in the media and rarely tackled by regulatory authorities or prosecutors, as noted in the previous progress report. This phenomenon is a battle we need to fight together, a battle where every individual can make a tremendous impact. As a step in this direction, the European Commission together with Facebook, Twitter, YouTube and Microsoft, agreed in 2016 a “Code of conduct on countering illegal hate speech online’’.

The activities under the “Block the Hatred. Share the Love!” campaign in Serbia that took part in different parts of the country emphasised the importance of combating hatred as a means for creating inclusive society for all and contributed towards further promotion of diversity at all societal levels. se activities involved prominent public figures, institutions, and activists who promoted diversity and equality in Serbia and the region through sharing personal experiences and testimonies. Ambassadors of the campaign against hate speech were Milena Radulovic, Sandra Siladjev, Milos Timotijevic and Slaven Doslo. This campaign was also supported by young European ambassadors through the EU-funded We Balkans program.

The European Union and the Council of Europe representatives reiterated their commitment to continue supporting local awareness-raising initiatives across Serbia focused on combating hatred, intolerance, and racism.

The campaign was implemented within the action “Promotion of diversity and equality in Serbia”, that is part of the joint European Union and Council of Europe programme "Horizontal Facility for the Western Balkans and Turkey 2019-2022". This programme supports key local actors and beneficiary institutions in Serbia and the Western Balkans in the fight against discrimination, hate speech and hate crimes directed against minorities, LGBTI people and other vulnerable groups of the Serbian society.