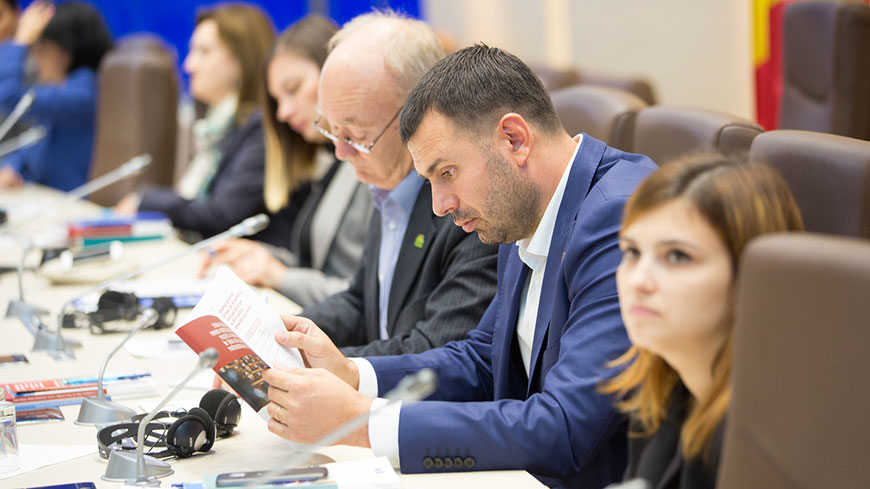 Three studies on different aspects of political participation of women came to the same conclusion: there are enough skilled, experienced and willing women in Moldova to participate at decision making level in politics, but party policies and persisting stereotypes in the society don't allow them to succeed.

During the presentation of the Romanian version of the regional study on Women´s Political Representation in Eastern Partnership Countries, which took place on the 26 September in the Europe Hall of the Parliament of the Republic of Moldova, around 60 representatives from Parliament, Central Election Commission, political parties and civil society agreed that equal participation of women and men in law making and decision taking is crucial for the democratic functioning of each country, but that a serious underrepresentation of women in political functions, particular at higher level, continuous.  At the occasion of the event the new study of the Central Election Commission "Gender equality in elections in the republic of Moldova” and the report on “Monitoring of the respect of the gender quota by the political parties of the Republic of Moldova” of the Gender Equality Platform were also presented and discussed.

As the regional study of Council of Europe shows, there are more women with university degrees than men in Moldova. And the study of the Central Election Commission Moldova revealed that in the general elections of the past year more women than men did cast their vote. But the number of women with political functions still remains low:  actually the female members of Parliament in Moldova constitute 20.8%, remaining at the same level as between 2005-2009, instead of the 40% defined in the Recommendation (2003)3 of the Committee of Ministers of the Council of Europe on balanced participation of women and men in political and public decision-making.

The regional study, conducted in Armenia, Georgia, Republic of Moldova, Ukraine, Belarus and Azerbaijan shows clearly - based on questionnaires and personal interviews - that women’s participation in politics depends on the role of woman in each society, the political context and the legal framework. But despite of laws adopted in Moldova, which should guarantee same rights for women and men, women are not equality represented in parliament, regional or municipal councils. Participants agreed, it is the political parties, that play a vital role in promoting women and a change of mind set of male political leaders would be necessary, as well as supportive measures within the parties to enable women to assume leading functions in a political party.

Education was identified as another essential element for change, the education of girls and boys equally, not only in academic substance but in values and social behaviour. As it was pointed out, female politicians normally don't lack expertise in substance, but sometimes they lack self-confidence and social skills to compete with their male colleagues.

The Council of Europe study, which was carried out as part of the Program Partnership for Good Governance between the Council of Europe and the European Union, was received by the participants as very useful input for discussion and the recommendation for the Republic of Moldova to make sure that the recently adopted electoral law for a 40% women’s quota is efficiently implemented by including the request that the women should be put on potentially winning positions, was endorsed by the majority of participants.

Press release of the Parliament