“Developing legislation, raising awareness, as well as training legal professionals are some of the ways the European Union and Council of Europe’s Partnership for Good Governance project ‘’Support to the implementation of the judicial reform in Armenia’’ has increased the effectiveness of Armenia’s legal system”, said Arthur Hovhannisyan, the First Deputy Minister of Justice.

“A lot of work has been done to make amendments and introduce new concepts after the changes to the Constitution in 2015. The support from the European partners came at the right moment, when all the legislation was required to be brought in compliance with the new Constitution within the shortest possible time” said Hovhannisyan. Since 2015, the European Union and Council of Europe have been working together under the Partnership for Good Governance to strengthen the capacity of Eastern Partnership countries’ institutions to implement justice sector reforms.

The development of the Civil Procedural Code is one of the benefits of the project, Hovhannisyan underlined that, “This is a cutting-edge Code, with innovations to optimise the judicial system”, he said.

"We set a deadline of 2 months to resolve these cases. In the past, these processes did not have deadlines they were to be resolved “within a reasonable time”, and this could be extended to longer than a year”, said Hovhannisyan. He added that this new regulation aims to better implement the right to a fair trial.

The project also made it possible to train hundreds of legal professionals in different fields to enhance the capacity of judges to apply the newly adopted codes and laws. 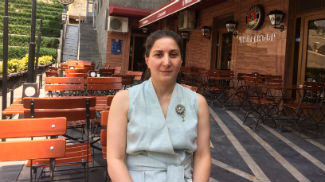 Lisa Grigoryan, a judge in Yerevan’s First Instance Court of General Jurisdiction, mentioned that training courses led by the project were especially helpful while working on the Civil Procedure Code. “Judges can actively be involved in drafting the Code. In the past, only legislators were in charge of working on the Code. Yet, the role of judges should not be underestimated, since they contribute a lot in terms of sharing experience on practical cases, and their opinions should be considered in the process of the Code drafting”.

In Armenia there is a low rate of representation of women in the judiciary, legislative and executive bodies, and the project also raised awareness on the increasing role of women judges.

“Our participation in the ‘14th Biennial International Conference of the International Association of Women Judges on Building Bridges between Women Judges of the World’ helped us learn new practices”, said Grigoryan. She mentioned that it helped to build an international network and learn about case studies on how women judges fight for their rights and succeed in their careers around the world.

“At the moment only 25% of judges are women in Armenia, but it should be at least 40%", said Grigoryan.

The reason for this is the attitude of the decision-makers, the majority of whom are men, she believes. “They think that women should not be appointed as a judge, because she will not be able to manage “such important positions”. “But this is not true, in the judiciary system we do have women judges, who manage very serious criminal cases”, said Grigoryan. She added, that the role of women and their involvement foster human rights and thus the development of the country.

According to Grigoryan, increasing the number of women in the judiciary will be beneficial, especially in resolving a range of issues concerning domestic violence and family issues. “Women have acute understanding of the role of the women in society and sometimes just because she is woman she can better perceive the hardships of a woman to suggest a more constructive and durable solutions”, she said.

The project also contributed to the development of the Judicial Code that is derived from the new Constitution.

“The Judicial Code is the most important tool for the justice system, and it has been thoroughly drafted and redrafted through the project and grants absolute independence to judges.”, Hovhannisyan said.

Moreover, the Supreme Judicial Council was established in February 2018 to ensure the independence of the judges.

The Council is represented by 10 members, 5 of which are elected by the parliament, while the others are elected by the General Assembly of Judges. The Council, among other functions, draws up and approves the lists of candidates for judges, including candidates subject to promotion and proposes to the President of the Republic the candidates for judges subject to appointment. The fact that the President still appoints the judges upon the recommendation of the Supreme Judicial Council or the Parliament raised concern that the judicial system is still not independent, yet this can only be changed through a referendum.

However, Hovhannisyan argues that the new Constitution made the role of the President nominative, and in case he is opposed to the candidate proposed by the Council, he will still have to confirm it or he will need to complain to the Constitutional Court.

Sergey Meghryan, a Council member, also believes that a number of legal provisions defined by the Constitution and the Judicial Code provide the body with ample powers to support the candidates making it difficult for the president to reject them.

“The Constitution and the regulations in the Code grant judges independence from the executive branch, and prescribe the Council a mandate to guarantee the independence of the judicial system and judges”, said Meghryan.

Moreover, Meghryan noted that the bases for social and financial independence of judges have been radically revised in the new Code.

Social independence, he explained, implies an improved provision of social protection for a judge. “In the past, judges did not have health insurance”, he said. The state budget for 2019 envisages a possibility to allocate funds for life and health insurance plans for judges.

In addition, the Council is pushing for an increase of salaries and pension benefits for judges. “These are key issues, and today the decision-makers well acknowledge them and wish to find a solution to increase the salaries to make them competitive and in compliance with the European standards”, he said.

This project is part of the four-year Council of Europe and European Union “Partnership for Good Governance” programme, which has a total budget of 36 million, it aims to strengthen the capacity of Eastern Partnership countries to implement domestic reforms to bring them closer to European standards in the fields of human rights, democracy and the rule of law.