The Regional Simulation on Referral of Victims of Human Trafficking in the Southern Mediterranean will take place from 23 to 29 October 2022 in Valletta, Malta under the title "Human Trafficking on Migration Routes". This major event will be organised by the Council of Europe in the framework of the joint programmes with the European Union and in partnership with the Government of Malta. 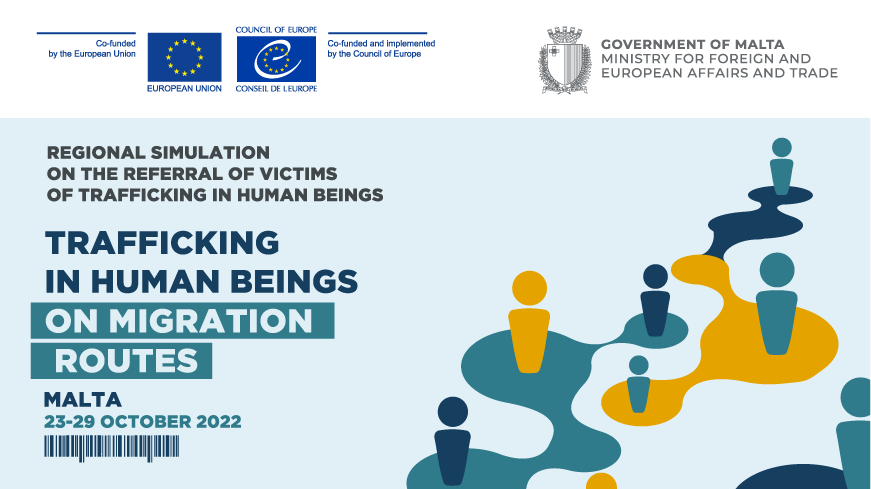 For the first time in the southern Mediterranean region, this event brings together more than 100 participants and experts, including representatives of governments, judges and prosecutors, law enforcement, social and medical services, labour inspectorates, civil society and the media from Algeria, Belgium, Egypt, France, Italy, Jordan, Lebanon, Libya, Malta, Morocco, Palestine*, Portugal, Switzerland, Tunisia and the UK.

Resulting from joint efforts in strengthening regional cooperation, this simulation takes stock of the establishment of the Tunisian National Referral Mechanism for Victims of Trafficking in Human Beings. This first-of-its-kind initiative in the Middle East and North Africa (MENA) region was launched by the National Body for Combating Trafficking in Persons (INLCTP) in 2021 with the support of the Council of Europe's "Support Project for Independent Bodies in Tunisia" and the European Union.

The fight against human trafficking requires extensive cooperation and the use of common tools. The regional simulation is a training aimed at professionals involved and based on a comprehensive approach that places victims at the centre of any action. It offers an opportunity to further clarify the intersections and differences between human trafficking and migrant smuggling.

Council of Europe Convention on Action against Trafficking in Human Beings

This activity is organised in the framework of the joint programmes between the European Union and the Council of Europe entitled "Protecting human rights, the rule of law and democracy through shared standards in the Southern Mediterranean" (South Programme V) and "Project to Support Independent Bodies in Tunisia" (PAII-T) co-funded by both organisations and implemented by the Council of Europe.