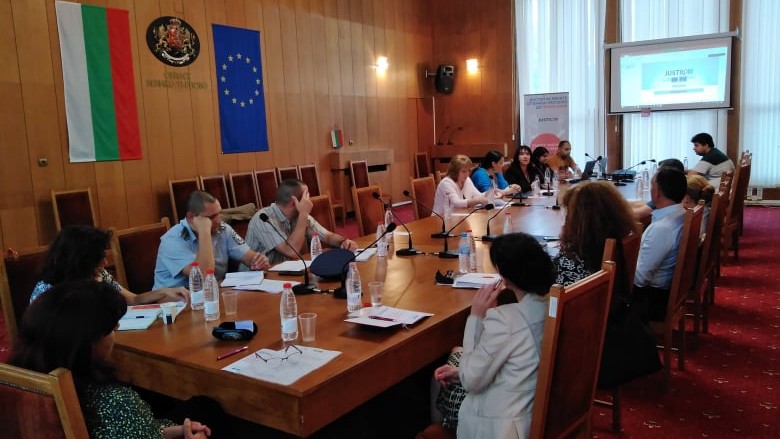 On 17 June 2020, Veliko Tarnovo District Administration hosted a meeting organised jointly by JUSTROM3 Bulgaria and Amalipe Center in connection with the increasing cases of domestic violence and hate crimes during the state of emergency.

The discussion was opened by the District Governor Prof. Dr. Lyubomira Popova. Moreover, Ms Dilyana Giteva, National coordinator of JUSTROM Bulgaria, presented the achievements of JUSTROM programme during the past three years, among which the contribution to the improvement of access to justice of dozens of Roma women, women from various minority groups and others who are also in a vulnerable position.

The discussions focused on two main issues: domestic violence, which has become more frequent during the pandemic months according to the experts, and hate crimes, which often remain invisible, but their proper identification as such sends a very clear message - not just to perpetrators, but also to the whole society.

Ms Teodora Krumova, JUSTROM3 Legal consultant in Veliko Tarnovo, stressed that in order to address the problem of domestic violence in the Roma community, teamwork is needed: on one side to change attitudes and sensitivity to violence within the community, on the other, to overcome stereotypes that exist among the institutions themselves. Last but not least, the existent mistrust on both side should be addressed.

Participants shared ideas about hate crimes and the importance of reacting quickly to perpetrators. They united around the message Racism is not fashionable, shared by the President of the District Court in Veliko Tarnovo, Mr Mladen Dimitrov.

A Council of Europe representative also joined the meeting online via Zoom - Ms Lyubov Stoycheva, a lawyer in the Department for the Execution of Judgments
of the European Court of Human Rights
, who spoke about the problems related to hate crimes and domestic violence in vulnerable communities, sharing international practices in dealing with such cases.

In conclusion, the participants agreed more can be done on this topic, to join forces for common activities aimed at raising awareness, prevention and subsequent joint response.