The starting point of the project “Inclusive Schools: Making a Difference for Roma Children” was based on the assumption that it is not enough to draw up policies of change. Change needs to be reflected at school level and in the environment of the children. There is often a gap between the statements and requirements in policy documents and the reality in which these need to be implemented. Practice has proven that for schools to overcome the rift of exclusive teaching and learning approaches, they have to re-examine what they teach, how they teach and how they assess learners’ performances. A real link with non-formal education and the support for families and communities was necessary to create a shift in education for the benefit of all learners.

The project interventions were based on the “Index of Inclusion: a guide to school development led by inclusive values”, developed by Tony Booth and Mel Ainscow (4th edition). The Index for Inclusion is a methodological tool which supports inclusive development in schools based on a framework of values. It focuses on three dimensions (creating inclusive cultures, producing inclusive policies and developing inclusive practices) to achieve inclusion not for a particular group of children, but for all individuals (adults as well as children), systems and settings.

At the practice level, the project carried out interventions in schools, with the aim to increase the understanding for the benefits of inclusive education. Within each country, the project targeted a number of schools in different municipalities in order to ensure an evidence-based intervention. The second level of intervention targeted policy review and adaptation.

INSCHOOL pilot phase was implemented between May 2017 and July 2019 in 5 countries: Czech Republic, Hungary, Romania, Slovak Republic and the United Kingdom.

During the Pilot phase of implementation, the INSCHOOL Joint Project was implemented in 25 schools in five countries over a period of 10.5 months (on average) during which the methodology was introduced and followed by schools with the guidance of INSCHOOL Educational Advisors and Facilitators. Each school created a Coordinating Group - comprised of teaching and non-teaching staff, parents and student representatives - and adopted an Inclusive School Development Plan (ISDP), on the basis of which INSCHOOL grants were disbursed. As a result, by the end of the project, most schools’ environment was visibly improved. This was possible through:

Particular attention was paid to the way in which Roma children were included in all school activities. By the end of the project, it became clear that the methodology combined with the activities covered by INSCHOOL grants, as well as any other action taken by schools as part of their ISDP, had a positive impact on Roma children.

National Working Groups (NWG) were created specifically for the INSCHOOL project in Hungary and Slovak Republic while dialogue with national authorities in the remaining countries was established in a different format. During the pilot phase, via national working group meetings and regular contacts with Ministries in charge of education, strong cooperation was established in each of the project countries as well as with relevant stakeholders - School Inspectorates, Institutes for Teachers’ Training or Institutes in charge of schools’ measurement and evaluation, but also Roma civil society.

Furthermore, the President of Romania visited the Ferdinand I Elementary and Secondary School, one of the INSCHOOL schools in Romania, thus highlighting the positive impact of INSCHOOL Project. By the end of 2019, a Ministerial Order on School Segregation in pre-university education was issued by the Ministry of Education and Research in Romania. It includes a large share of the Indicators used by the INSCHOOL Joint Project’s methodology based on the “Index for Inclusion”. 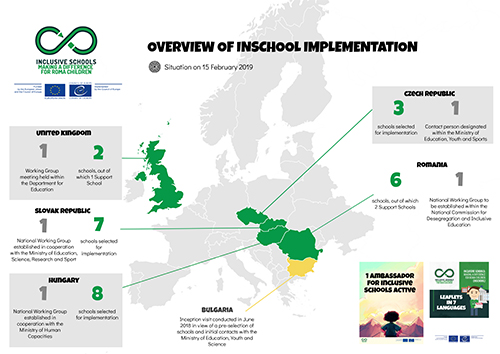