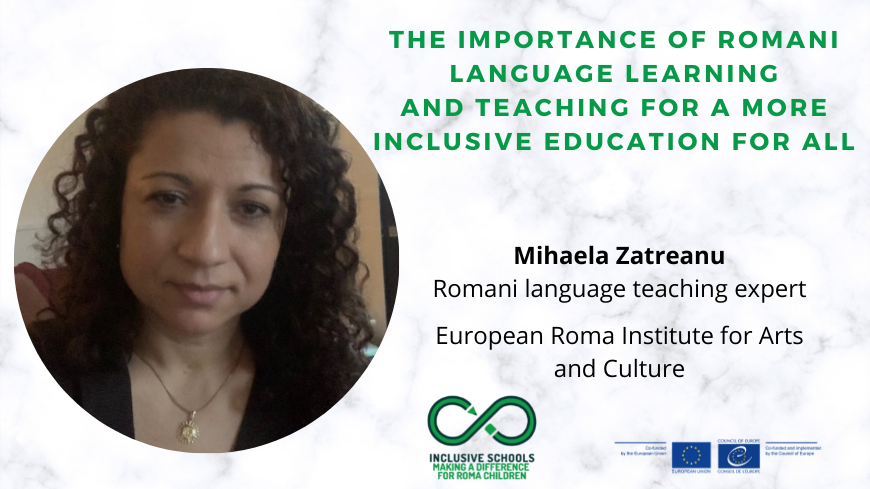 This article aims to describe the importance of Romani as mother tongue in shaping the cultural and personal identity of Roma students and its crucial role in child’s overall development, psychological well-being, and self-esteem. It also analyses how cultural and personal identity can influence school performance of Roma students and evaluates how identity confusion, due to discriminatory events, may affect the psychosocial functioning.

Moreover, this article would like to point out how essential the Romani mother tongue is in the initial literacy of Roma children for their cognitive development and for better educational achievements, but also as an integral part of the inclusive culture in schools.

Contributing to the proof of Indian origin of the Roma people, Romani is considered an Indo-European language, belonging to the Indo-Iranian branch, more precisely, to the Indo-Aryan branch. Romani is one of the largest minority languages in the Council of Europe and European Union countries, being characterised as a transnational language, consisting of many dialects in the different countries where it is spoken.

Since receiving recognition from the Council of Europe through different resolutions and recommendations, and after being included, in 1992, in the European Charter for Regional and Minority Languages, as a non-territorial language, Romani has been recognized by 15 states, out of the 25 states that ratified the Charter, as a minority language present on their territory.

However, although 15 countries have ratified the Council of Europe’s Charter, there are no significant governmental efforts for concrete implementation, except for a few countries across Europe. The introduction of the Romani language in the mainstream education is sporadic, experimental, and dependent on local initiative. The study of the Romani language at university level, taking the form of independent courses seems to be more visible and qualitative (Matras, 2005: 14).

In the past decades, there have been some intensive efforts in the promotion and preservation of Romani language carried out by Roma organizations through various forms of written and oral communication. Roma communities all over Europe have produced multiple publications, translations, e-mail communication, international conferences, radio, TV, media content and, more recently, social networking, making use of the different varieties of Romani with a growing interest to build up a common transnational Romani language. This interest is supported by the European Roma Institute for Arts and Culture (ERIAC) who has relaunched the concept of "common Romani language" at international level in 2020 through the Romani Language Initiative, being aware that, in addition to its vital role for the cultural identity of Roma people, Romani is also a connecting element and a link between the Roma communities from around the world.

Romani language tells Roma people about their beginning and their origin, it gives them a sense of belonging, and strengthens their value system, pride and dignity linked with their roots. For children from certain Roma communities, Romani is the first language that opens them the door towards understanding and knowledge, towards the emotions they grew up with and represents a connection to their cultural identity and belief system.

Throughout history, many Roma groups have lost their language due to assimilationist policies practiced by the different states, which culminated with the Holocaust, a trauma that sowed panic and despair among all Roma, making them refuse to declare their identity even today, and stop passing on the Romani language to their children. But those Roma who do not know their language anymore, go through a hard time in finding a connection to their culture and their roots.

The United Nations admitted that languages have complex implications for identity, communication, social integration, education, and development. Much other research tells us that mother tongue plays a crucial role in child’s overall development and how essential is in shaping the child’s personality, as well as his or her psychological development, thoughts, and emotions (Cummins, 2000).

Research has also shown that instruction in the mother tongue, especially from early age, has a significant impact on a child's cognitive development and academic performance. The mother tongue is the foundation of their connection with family, society, culture, and identity (Baker, 2000); (Cummins, 2000); (Skutnabb-Kangas, 2000).

Romania is one of the first countries who started a successful programme on identity reconstruction through the study of the Romani language and history within the school system, a unique initiative started back in 1990. Various educational legislative measures and projects have been created by the Ministry of Education in cooperation with Roma NGOs. Many human resources were trained and employed in the school system, such as Roma inspectors, Roma principals, Roma school mediators, Roma language teachers, Roma educators and teachers, Roma school advisers. In addition, an impressive number of tools for teaching Romani were created for kindergarten up to university level (Sarau, Gheorghe, 2013).

Some of important measures taken by the Ministry of Education in Romania with the support of the Roma NGOs were:

Following these measures, the statistical situations showed 7-11% of Roma students from the general number of students assumed proudly their identity, had better academic results and that the school attendance at all levels has increased (Sarau, Gheorghe, 2013).

Romani language is much more than a system of communication inside the community, it is a stable indicator of the Romani cultural identity, a symbolical marker which gives Roma people the sense of belonging, being recognized and assumed by the most prominent representatives of Roma culture as a sacred entity for its people, from its beginnings to the present day.

Besides being an indispensable fundamental sign of the Roma cultural heritage, Romani language, together with the flag, the anthem and the International Roma Day celebrated every year on 8th of April and assumed by Roma worldwide, brings in the supreme testimony of the Romani transnational identity and represents the foundation of their political unity.

But why is cultural and personal identity important? The cultural identity gives us the sense of belonging, it helps us define ourselves in relation to the cultural groups we come from, while personal identity represents our true self made up of our goals, values, and beliefs. Between the two identities there is a strong connection, and one influences another in complex ways. In discriminatory events such as underestimation of the group you belong to, lack of respect for your mother tongue, can bring dissatisfaction, uncertainty and even identity crisis (Schwartz et al., 2008).

When Romani language, a central feature of Roma students’ identity, is seen as a low-status language, historically banned in public and associated with negative appellations, it undoubtedly produces negative effects on both, the cultural and implicitly the personal identity. Therefore, many Roma face a low cultural identity commitment, meaning an uncertain sense of self, involving a low self-esteem with direct effects on their psychosocial functioning. This could also be an explanation for the low academic achievements of Roma students in schools and for the high rates of drop-out, because our identities influence our behaviour and our reactions in everyday life. Research has shown that people with low identity commitment are not prepared for the developmental tasks, while people with high identity commitment have a firm sense of who they are and feel strongly about the choices they make (Syed et al., 2013); (Schwartz et al., 2013); (Adams & Marshall, 1996).

The inclusion of the language, culture, and history of Roma in the national curricula and in the school development plan will help Roma students to express their identity and their individuality. Besides strengthening their cultural and personal identity, Roma students will be able to introduce themselves to the others with dignity, self-confidence and be proud of who they are. Moreover, this represents a real contribution to the inclusive educational process and a chance for non-Roma students to learn about the cultures with which they coexist and interact every day.

The importance of Romani for a more inclusive education for all

Although many countries are characterized by multilingualism, the educational systems continue to allow a single language to dominate the education sector. Making use of mother tongue in the educational process can contribute to learning other languages and can help students develop stronger literacy skills in the school language (Cummins, 2000).

The presence of the Romani language in schools should not only be a symbolic choice, but a conscious decision based on the recognition of the importance that Romani, as a mother tongue, has in developing a strong cultural identity of Roma students. As mentioned above, a high identity commitment is not only the foundation of emotional stability and wellbeing, but also the basis for cognitive development as well as intellectual improvement.

According to the “Index for Inclusion: a guide for school development led by inclusive values” (by Tony Booth and Mel Ainscow) which suggests that:

Through inclusive education, the school is welcoming and is responsive to diversity in ways that values everyone equally. It also creates space for the expression of the different cultures represented by languages and values, knowledge, histories, beliefs, rituals, art in an affective climate, based on harmony, balance, transparency, accountability, and fairness. This contributes to a deeper understanding of the differences between students as a resource for the learning process, valuing and capitalizing on diverse life experiences.

For Roma children, to be able to participate actively and effectively in the learning process, their language, values, histories, beliefs, rituals, and arts should not only be included in the School Development Plan, but also respected and valued. In this way, Roma students will start developing a good feeling about their teachers and their school and therefore, they will be encouraged to show the others proudly who they are, participating in their own learning and having increased chances toward school success.

Romani language and the historical origins are not only stable indicators of the Romani identity, but also a key element for the educational inclusion of Roma children, it is vital in framing their thinking and emotions. A person’s mother tongue represents the connection to self and to family and it is very necessary for their comprehensive and cognitive development.

The tasks of the governments/ministries are to adopt policies for increasing the school participation of Roma students by introducing Romani language and history in the national school curricula and by supporting the development of qualitative teaching materials, enabling the training and employment of Roma teachers, trainin of non-Roma teachers from the perspective of educational Romanipen. etc.

Schools should take full responsibility in supporting the cultural identity of Roma students, through different cultural-educational activities and be aware that this represents a cornerstone for students’ school success. Giving Roma students the chance to be authentic, to show their true self will ensure their well-being in the school environment, but also strengthen their self-esteem by knowing and embracing who they are.

The inclusive educational process requires a School Development Plan based on the specificity of the school population and their cultural backgrounds. Inclusive education can only be possible if Roma students’ language, values, histories, beliefs, rituals, and arts are an integral part of the learning process and the learning environment.

*This article was produced within the framework of the European Union and Council of Europe Joint Project “Inclusive Schools: Making a Difference for Roma Children” . The views expressed herein can in no way be taken to reflect the official opinion of either party. 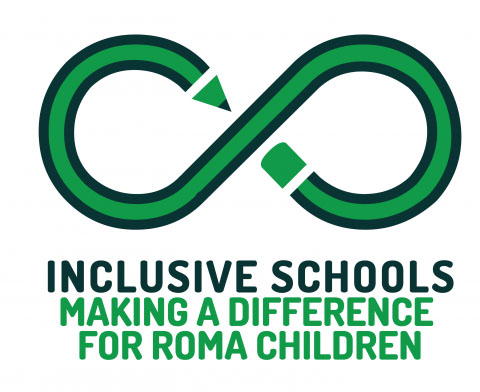