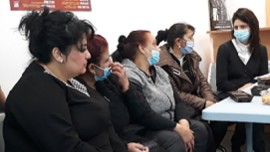 In March 2021 the JUSTROM3 team in Plovdiv (Bulgaria) implemented an awareness raising meeting and two outreach meetings with Roma women from the local community in Stolipinovo.

The awareness raising meeting was held on March 19 2021, gathering 15 participants. Firstly, the theoretical part of the meeting included an introduction of the JUSTROM3 program, the presentation of the team and issues of interest. The meeting continued with discussions and dissemination of materials on the topic of violence against women and key human rights violations in that regard. The objective was to raise awareness on different types of gender-based violence, as well as the UN Convention on Elimination of All forms of Discrimination against Women (CEDAW Convention) and the Bulgarian legislation in this field. The following part of the gathering was dedicated to discussing how to prepare a safety plan in case of domestic violence, crisis intervention and the repercussions of psychological abuse on women and their children, as well as how women could benefit from free of charge psycho-social programs in the city. Information materials were prepared to support the discussions.

The participants were encouraged to share their opinion and to list examples of types of violence against women and children. The importance of education as a fundamental children’s right was also underlined. A special emphasis was laid on the topic of early marriages and their negative impact on children’s development. After the discussions, the participants were given space to share their personal stories and problems with the team. Some of them brought up family issues like divorce, housing and denial of targeted social support in the winter.

The two outreach activities implemented on 12 and 17 March 2021 were led by the Roma women-leaders engaged in the Programme. They managed to gather residents of the poorest and most secluded area of the Stolipinovo neighbourhood, Sokola. The Roma women leaders organising the activities introduced the JUSTROM3 program, their role as women-leaders and the support programs that the team offers. They shared good practices developed by the program: the circles of women that they engage in monthly meetings, their work with institutions, the importance of voicing one’s concerns.