Freedom Without Hate: Reconciling Freedom of Expression with other Human Rights 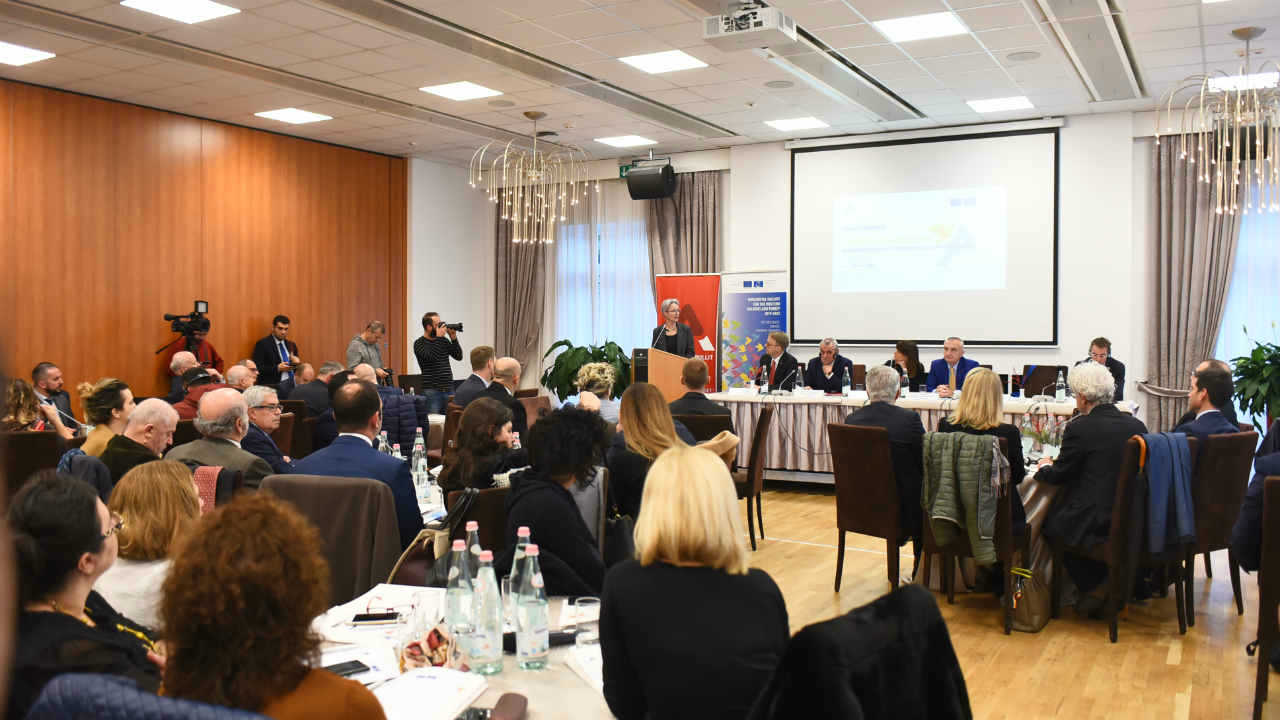 Freedom of expression constitutes a fundamental human right that rests in the foundations of a democratic society, and therefore all actors in Albania, including governmental agencies, civil society organizations and international community should work together to guarantee that such right is exercised within the boundaries of hate speech and defamation.
The National Conference “Freedom Without Hate: Reconciling Freedom of Expression with Other Human Rights” organized by the Office of Ombudsperson in cooperation with the Council of Europe Office in Tirana, in the framework of the European Union and the Council of Europe joint Programme ‘Horizontal Facility for the Western Balkans and Turkey 2019-2022’, shared with key actors in the field important perspectives on how to counter hate speech and foster tolerance and dialogue through enhancing partnerships among various actors and stakeholders in the field of freedom of expression.

The Conference was opened by Albanian Ombudsperson Ms. Erinda Ballanca who stressed the importance that freedom of media has for a democratic society and the role of education in combatting hate speech“… this can be achieved by devoting more efforts for emancipation, education and development of the critical thinking in our society,” said Ms. Ballanca
President of the Republic of Albania Mr. Ilir Meta in his remarks stressed that: “ freedom of speech and right to information, despite the fact that are fundamental constitutional rights, they are closely linked with the building of a democratic state. Thus freedom of speech is an indicator for democracy, good governance and public responsibility in the country…”

Head of Council of Europe Office in Tirana Ms. Jutta Gützkow addressed the event and focused on the new media law package. “Despite the rationale behind this initiative, the instruments introduced in the package raise concern on their compatibility with the Council of Europe standards or with common European practice”, said Gützkow reiterating that the Council of Europe stands ready to provide a legal opinion on these texts in the framework of Horizontal Facility for the Western Balkans and Turkey.

Speaker of the Parliament Mr. Gramoz Ruci in his remarks tackled the need for an ethical communication emphasising the democratisation of the media. “…I have understood that media self-regulation is very important, nonetheless it can not guarantee the protection of human rights without completing such regulations also from the state.” said Ruçi.

Mr. Brian Williams, UN Resident Coordinator in Albania in his remarks was focused on the risk of hate speech in the framework of minorities, where according to Bryan when somebody is targeted on the basis of participation in a group, rather then from individual opinions, we need to raise the red flag, and everybody should pay attention on the use of hate speech.

The Conference was also addressed by the Chargé d’Affaires of the U.S Embassy in Albania, Mr. Daniel Koski, who stressed that that freedom of speech is not a licence to speak what we like regardless the consequences. “It is not easy to mark the border between acceptable speech and speech that provokes violence, that’s why we are here to survey the boundaries of freedom of speech”, said Mr. Koski

The event continued with two discussion panels which aimed to analyse and provide some insights on the notion of fighting hate speech in the perspective of anti-discrimination. In this context participants tackled important matters surrounding freedom of expression such as mechanisms for media self-regulation and media legal regulation, referring in this framework to Strasbourg Court ‘s jurisprudence on the issue.

During his speech Mr. Darian Pavli, Judge in the European Court of Human Rights in respect to Albania said: “Reconciling freedom of expression with the need to prevent the spread of seriously harmful speech, especially in the online sphere, is one of the great challenges of our time. Great care is needed in crafting legal regimes that address these harms while upholding the essential value of free speech in any democratic society.”

During the Conference representatives from the Ombudsperson Office, Commission for Protection from Discrimination and the Albanian Media Council announced the establishment of ‘No Hate Alliance’, which is an initiative of these organisations to engage and work with key actors in the field such as the Commissioner for Protection from Discrimination; Albanian Auto-visual Media Authority; Albanian Media Council; Delegation of the European Union to Albania, Council of Europe Office in Tirana etc., and join efforts to advocate and advance in countering hate speech and promoting equality. The alliance will also aim to identify potential mechanisms to combat hate speech based on European best practices.