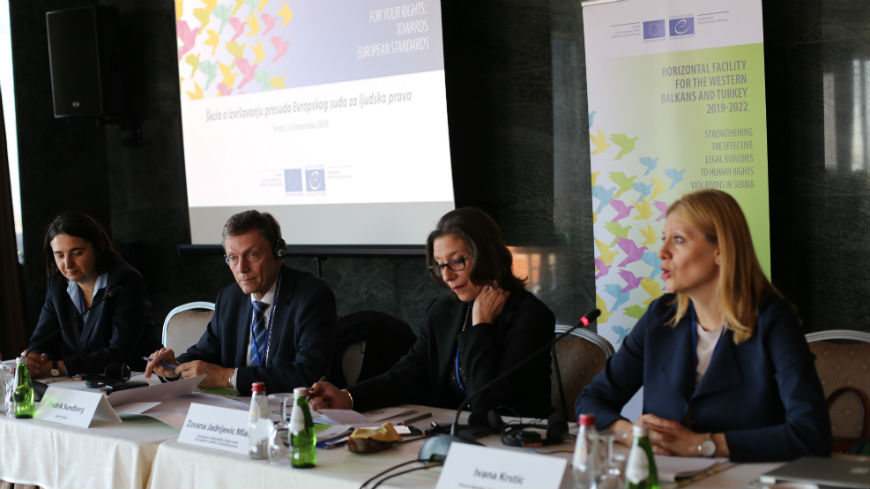 Twenty-four legal professionals from various public bodies, law students and researchers and human rights NGOs’ representatives participated in the first School on the execution of the judgments of the European Court of Human Rights (ECtHR) organised by the Council of Europe in Vršac, from 1 to 3 November 2019.

In an intensive three-day course, participants had an opportunity to learn about legal basis for execution of the judgments of the ECtHR, main actors in the process and their role, general and individual measures and compensation schemes.

The trainers included former judges of the European Court of Human Rights, lawyers of the Department of the Execution of the Judgments of the ECtHR of the Council of Europe Secretariat, experienced legal practitioners from Serbia and other European countries.

Lectures were combined with panel discussions, where the participants could hear more on the institutional role and challenges before the government agents in the execution process, and the role of law faculties and judicial academies in raising awareness of the European Convention on Human Rights.

The school was organised within the Action “Strengthening effective legal remedies to human rights violations in Serbia”, which is being implemented under the joint program of the Council of Europe and the European Union “Horizontal Facility for the Western Balkans and Turkey II”, in co-operation with the Department for the Execution of Judgments of the European Court of Human Rights, Center for Human Rights of the Law Faculty in Belgrade and Judicial Academy of the Republic of Serbia.