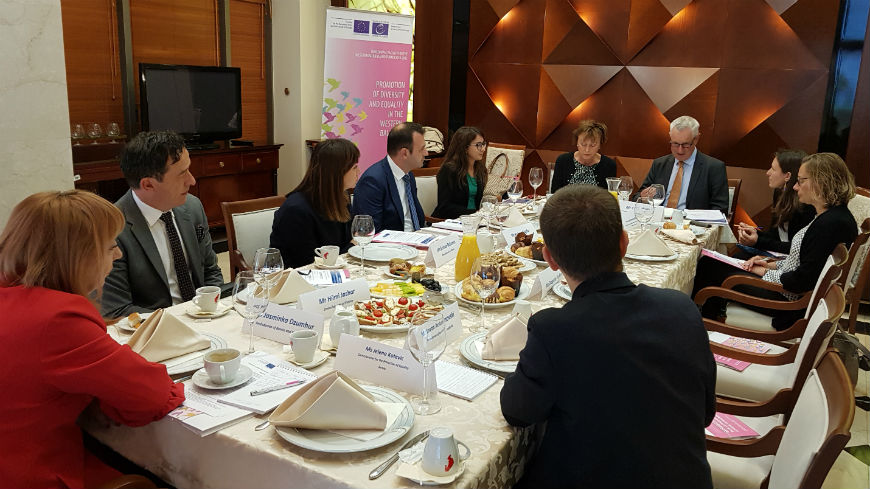 As a side activity of the launching of the EU/Council of Europe Joint Programme Horizontal Facility – phase II, the Council of Europe and the European Union gathered equality bodies representatives, in view of consolidating the proposal for a regional action with focus on their responses to hate speech, identified as a common challenge across the board. The action’s proposal aimed at reinforcing the existing capacities of equality bodies in combating hate speech, including by equipping them with capacities in collecting and monitoring data; reporting on hate speech cases; defend victims and interact with the civil society active in this field.

Verena Taylor, Director General for Programmes at the Council of Europe, recalled that fighting discrimination, namely ‘the protection of the rights of vulnerable groups’ is one of the four key areas of engagement of the EU and CoE as per the second phase of the HF program. She explained that the regional component has been conceived considering what the common denominators would be in fighting discrimination nowadays, in the Western Balkans and that the CoE European Commission Against Racism and Intolerance’s general policy recommendations on the role of equality bodies in the prevention and elimination of discrimination, and on combating hate speech, provide guidelines to policy-makers across Europe.

Erinda Ballanca, Ombudperson of Albania, mentioned that there is an increased hate speech in the public discourse and less responsibility for it. She also talked about the position of the human rights defenders and said that human rights defenders are becoming a vulnerable group. She concluded that equality bodies need deeper structural support in the fight against discrimination and hate speech. Hilmi Jashari, Ombudsperson of Kosovo*, stressed the need of coordination with existing projects, and the importance of the role of equality bodies in this field vis-à-vis Judiciaries. Jasminka Džumhur, Ombudsperson of Bosnia and Herzegovina recommended an analytical approach to the issue of hate speech, clearly defining boundaries with defamation, and to ensure a good preparatory work ahead of activities. Robert Gajda, Albanian Commissioner for Protection of Discrimination, emphasised that it is crucial to work with the Universities and that they should be more included, for their responsibility in educating the next leaders of the countries.

Colin Wolfe, Head of Unit for regional programmes in the Western Balkans, DG NEAR, European Commission, pointed out that it is very important to change the attitude of the societies, that it is not acceptable to discriminate and to promote hate speech and that this should also be part of the action, to look on ways how to promote democratic values and why are they crucial for democracy and development. He stressed that regional co-operation is important because of the exchanges and the reciprocal support.

The regional action’s proposal will be further circulated in writing to equality bodies for further comments, with an initial plan of activities included. Field work to prepare a comparative analysis on the role of equality bodies in combating hate speech is set to start in the coming period. The action is a part of the joint EU/CoE programme Horizontal Facility for the Western Balkans and Turkey 2019-2022.