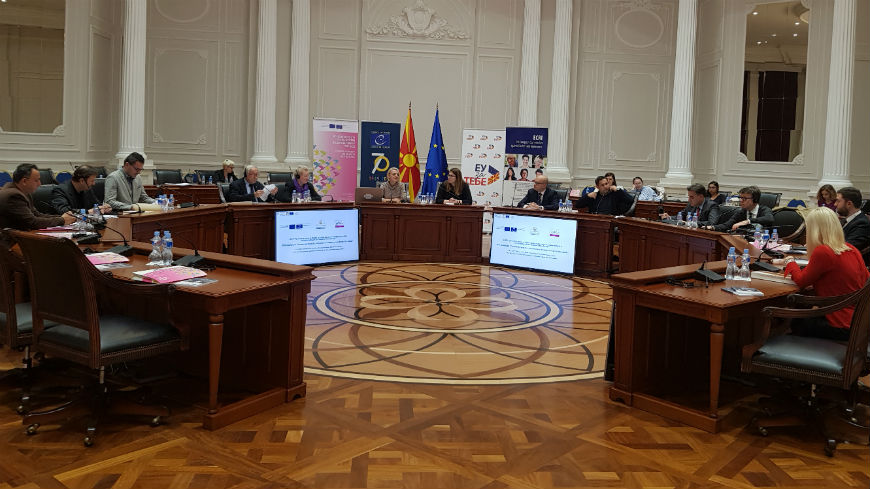 The Council of Europe’s anti-racism body, the European Commission against Racism and Intolerance (ECRI) co-organised a round table in Skopje on 14 November 2019 to discuss the follow-up given by the authorities to the recommendations of the ECRI 2016 report on North Macedonia, including the efforts to combat hate speech in the country in the framework of good practices and European standards.

The event was held in co-operation with the Ministry of Labour and Social Policy of North Macedonia and with the support of the European Union in the framework of the joint European Union and Council of Europe programme “Horizontal Facility for the Western Balkans and Turkey II”.

The event was opened by Ms Gjulten Mustafova, Head of the Equal Opportunity Department in the Ministry of Labour and Social Policy, who stated that the concept of equal opportunities was part of the government programme and that fighting discrimination was a priority for the government and all ministries. “There is a new law on preventing discrimination and in the future, we need to focus on developing further measures for implementing it”, she said.

“This topic is very important for the EU Delegation in North Macedonia and we are hopeful, since there are positive developments regarding non-discrimination”, said Ms Virve Vimpari, Head of Section for Infrastructure, Agriculture and Social Policies from the EU Delegation. As she underlined, the process of raising awareness and engaging all levels of the society must continue and the EU delegation and EU have significantly contributed to this area.

In his introductory remarks, Mr Stefano Valenti, Head of the No Hate Speech Co-operation Unit from the Anti-discrimination Department of the Council of Europe emphasised the importance of this event as an open discussion forum. “The ECRI report is an official document accepted by the government and this round table was also organised to look at the progress made and to see what the joint EU/CoE programme “Horizontal Facility for Western Balkans and Turkey II” could do to help the government regarding these issues”, he concluded.

The 2016 ECRI report on North Macedonia, presented by ECRI member Mr Gerald Schöpfer, focuses on four common topics: national legislation to combat racism and intolerance; hate speech; racist violence and integration policies, but it also addresses the situation of LGBT persons. It expresses concerns about shortcomings in the criminal, civil and administrative legislation in combating racism or racial discrimination, deficiency of the powers and resources of the Ombudsman and the Commission for Protection against Discrimination, the rise in racist and homo-/transphobic hate speech, as well as persisting problems with the socio-economic integration of Roma.

During the round table, representatives of the North Macedonia’s authorities pointed out that the Anti-Discrimination Law is in line with European standards and that the overall legislation in the country will be harmonized with this Law by 2021. Furthermore, they presented the measures that are being undertaken to improve the integration of Roma at all levels of society, in particular by ensuring better access to rights, education and healthcare.

It was concluded during the round table that Europe is facing a general crisis in this area and that hate speech is a complicated phenomenon with different manifestations requiring different responses. The role of the media and Internet was discussed, as well, and the participants concluded that both can have a very positive or negative effect. In the case of North Macedonia, as presented by Mr Valenti, there were difficulties in 2015 of understanding what hate speech is and very few court cases on hate speech, with no convictions. Furthermore, regulation and self-regulation of the media was not working well, and negative stereotyping of sexual minorities was prevalent in the media. In the future, greater efforts need to be made in the area of combating hate speech.