Third ELSA Italy-JUSTROM 3 Webinar: An overview on non-discrimination and Roma, with focus on inter alia legal status and statelessness 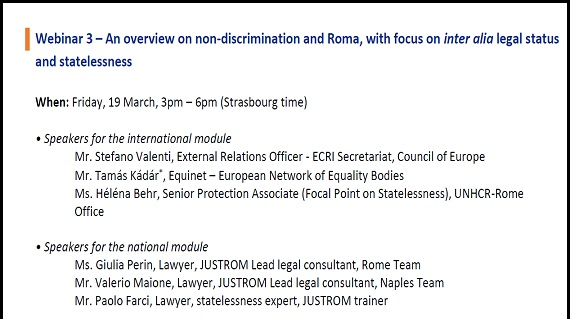 On Friday 19 March 2021 the joint EU/Council of Europe programme JUSTROM3, with UNHCR Rome Office, and the European Law Students Association Italia (ELSA Italy) held the third webinar of the series organized on the occasion of this year’s Moot Court Competition (XVIII edition), which will focus on trafficking in human beings, statelessness, and Roma women. The webinar was attended by 75 participants.

The discussions were focused on the current legal current EU legal framework on combating discrimination and on equal treatment, and on the various challenges in its effective implementation.

The role of UNHCR was presented, namely that its mandate encompasses the protection of stateless persons through four pillars of intervention: identification, protection, reduction, and prevention. The 1954 Convention relating to the Status of Stateless Persons and the 1961 Convention on the Reduction of Statelessness were presented to the participants.

Examples of different situations of irregularity or undocumentation were presented and the two existing procedures for obtaining a certificate of statelessness in Italy were discussed, in order to demonstrate that this situation is solvable, despite the substantial barriers encountered to access justice. The so-called Kyenge Decree was also presented, on facilitating access to citizenship for all those who were born in Italy and live, on a continuous basis, in the country.

The webinar also addressed the issue of multiple and intersecting discrimination of women, as well as the work carried out by ECRI as a human rights monitoring body.
2021-03-19T05:18:00