Reviewing codes of conduct in higher education in Pristina 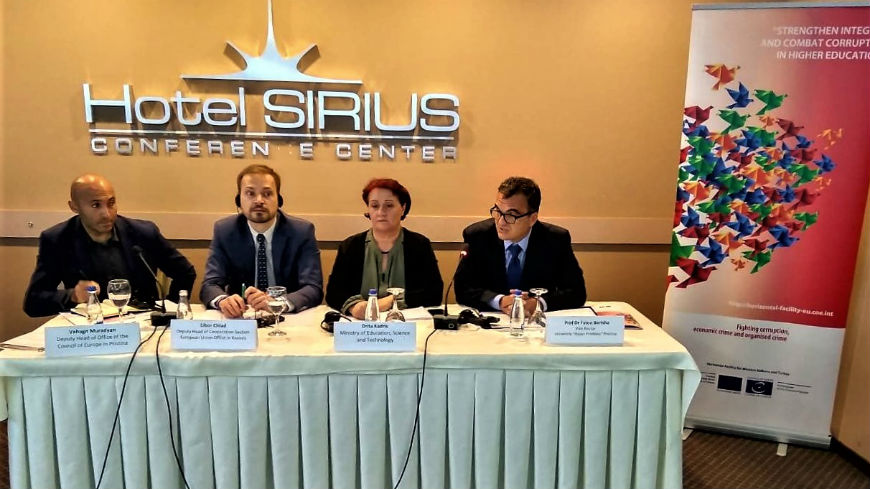 Over 70 university professors, students, senior management of public universities, representatives of Kosovo Accreditation Agency and NGO representatives actively participated in a two-day workshop on codes of conduct in higher education in Pristina on 25-26 September 2018.

This workshop is part of the joint European Union and Council of Europe action to strengthen integrity and combat corruption in higher education in Kosovo*.

The participants reviewed and adapted the codes of conduct for three categories in higher education:

Opening speeches were delivered by Mr Vahagn Muradyan, Deputy Head of the Council of Europe Office in Pristina; Mr Libor Chlad, Deputy Head of Cooperation in the European Union Office in Kosovo; Ms Drita Kadriu, Head of Higher Education Department at the Ministry of Education Science and Technology, and Mr Faton Berisha, Vice-Rector for Scientific Research at the University of Pristina.

During the workshop, participants of the first working groups discussed the provisions related to their functions within the university and also on the methodologies to incorporate the codes of conduct in the university regulations. The working group composed of academic staff focused on reviewing existing provisions in the current codes of ethics as well as on adopting those provisions that are currently missing, in terms of improving the quality of academic activity, teaching, research and publications.

The third working group involving students reviewed the provisions applicable to them, which was also followed by a debate whether the dress code in higher education should be included in the codes of ethics.

For the final phase of this engagement process the universities in Kosovo are expected to implement these codes of conduct by modifying and adopting the regulations which will put them into effect.

The action “Strengthen integrity and combat corruption in higher education” is co-funded by the European Union and the Council of Europe under the framework of the Horizontal Facility for the Western Balkans and Turkey Programme.