Achievements of actions in education discussed with major stakeholders 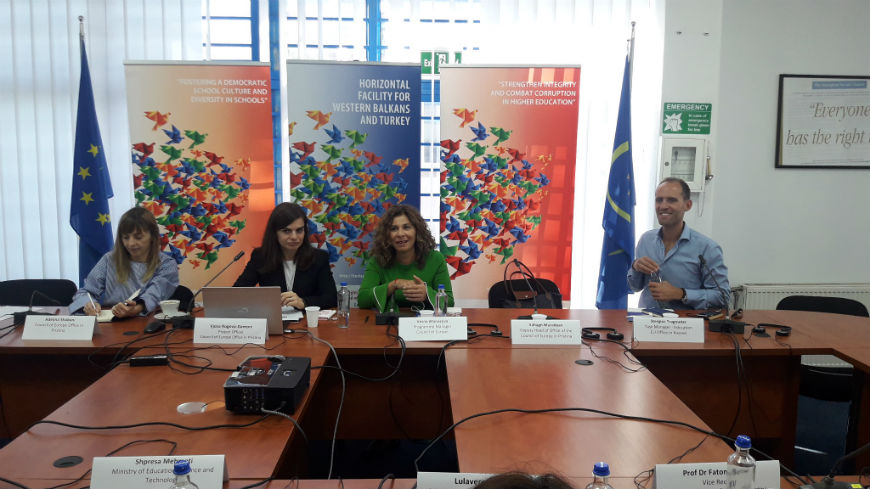 The fourth and the final Steering Committee meeting of the two actions on Education under the Horizontal Facility for Western Balkans and Turkey, “Strengthen Integrity and Combat Corruption in Higher Education” and “Fostering a Democratic School Culture and Diversity in Schools”, was held on 10 November 2018 in Pristina.

Members of the joint Steering Committee reviewed achievements of the two actions in education. They agreed that both projects’ developments have met the expected results and have had a very positive impact. Prof. dr. Faton Berisha, Vice-rector of the University of Pristina, emphasised that the project has made a difference in Kosovo* and has contributed to an increased awareness of the fight against corruption in education. Whereas the issue of integrity in education was not a subject of concern in the society previously, as a result of the project, the impact of corruption on the quality of education cannot be any longer disregarded by the society and people have started to appreciate the importance of academic integrity. Dr. Berisha emphasised the importance to ensure the sustainability of the action and the dissemination of information once the project will end.

The representative from the Ministry of Education, Science and Technology expressed her appreciation of the project for its contribution, the work carried out in schools and the development of the policy roadmap, an important document which serves as guidance to the policy makers.

In her turn, the Council of Europe programme manager highlighted that the work implemented with the local coordinators is a key to building local capacities and an opportunity for a sustainable follow-up.