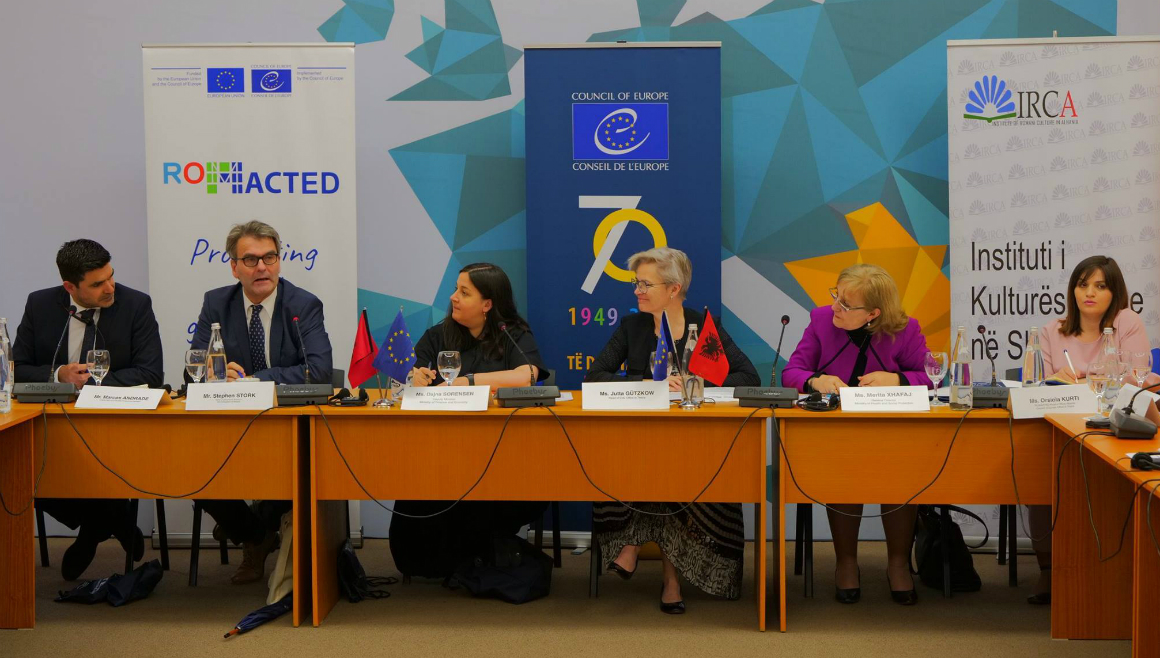 The Second Advisory Group Meeting of the joint EU/CoE ROMACTED Programme took place in Tirana on 24 April 2019. The event brought together the main relevant stakeholders at central and local level, the local teams, European Union and Council of Europe representatives to discuss the progress of the ROMACTED Programme in Albania to date, take stock of the current advancement and provide recommendations for the upcoming implementation period during 2019.

Dajna Sorensen, Deputy Minister, emphasized the important role of the Ministry of Finances and Economy in the provision of funding mechanisms for the implementation of the National Action Plan for the Integration of Roma and Egyptians. Ms Sorensen congratulated on the programme accomplishments reached so far, highlighting the design of the Local Action Plans for Roma Integration, established partnership among local employment offices and municipalities and the continuing support in the preparation of the secondary legislation of the Law on Social Housing.

Merita Xhafaj, General Director of the Ministry of Health and Social Protection and National Roma Focal Point, recalled on the ROMACTED partner municipalities to endorse budgeted local action plans for Roma Integration in the municipality councils. Upon this milestone, ROMACTED municipalities could be eligible in accessing the EU funding possibilities in the framework of the social inclusion package, being currently prepared by the Albanian government and European Union Delegation, expected to start by the end of 2019.

Robert Gajda, Commissioner for the Protection against Discrimination, highlighted the successful model of the joint EU/CoE programme partnerships such as ROMACTED Programme in bringing about tangible results for the protection of human rights for Roma and Egyptian minorities in Albania.

Stephen Stork, Head of Operations Section 1, EU Delegation to Albania, made reference to the necessity of the fulfillment of Key Priority No.5 for opening of the EU accession negotiations for Albania and the importance of concrete actions towards improving living conditions of Roma. Emphasis was put to the available EU funding support through the (i) social inclusion package; (ii) Civil society support; (iii) and local government programmes.

Jutta Gützkow, Head of Council of Europe Office in Tirana, highlighted the contribution of the ROMACTED Programme as a means to making a difference in the life of the Roma communities relying on grassroot initiatives taken by municipalities and local community action groups. Ms Gützkow congratulated Albanian authorities for the noted progress in the legal frameworks which affect the situation of Roma and Egyptians and recalled on the need of the adoption of the bylaws of the Law on the Protection of National Minorities and the Law on Social Housing.

Marcos Andrade, ROMACTED Programme manager, provided the regional perspective of the implementation of the programme in the Western Balkans and Turkey, main achievements at the beneficiary level for Albania and the upcoming small grant scheme, that will be launched soon in the framework of the Programme.

Orsiola Kurti, ROMACTED Project Officer and Bledar Taho, Focal Point, urged on the local authorities to promote Roma candidates in the local elections to be held in Albania, as the direct intermediaries expressing the needs and priorities of Roma at local level and joint selection of priority actions to be implemented by institutional working groups and community action groups.

The last working panel focused on the Roma Responsive Budgeting with discussions from representatives of the relevant institutions, Eriglisa Lami, Roma Advisor to the Minister of Health and Social Protection, Bekim Murati, General Director of the Agency for the Support of Local Self-Governments, Fran Brahimi, Local Finance Director in the Ministry of Finance and Economy and Raimonda Duka, Independent ROMACTED expert.

The Second Advisory Group Meeting was followed by local monitoring visits on 25 April 2019, and contribution during the multi task force meetings, namely on the consultation of the Local Social Plan in Roskovec and harmonization of the Roma Integration Local Plan with the annual and medium term budgeting processes in Vlora.

ROMACTED Programme aims at building up political will and sustained policy engagement of local authorities to enhance democratic local governance and empowerment of local Roma communities. The programme is being implemented in the seven partner municipalities of Elbasan, Permet, Fier, Korca, Pogradec, Roskovec, Vlora in Albania.