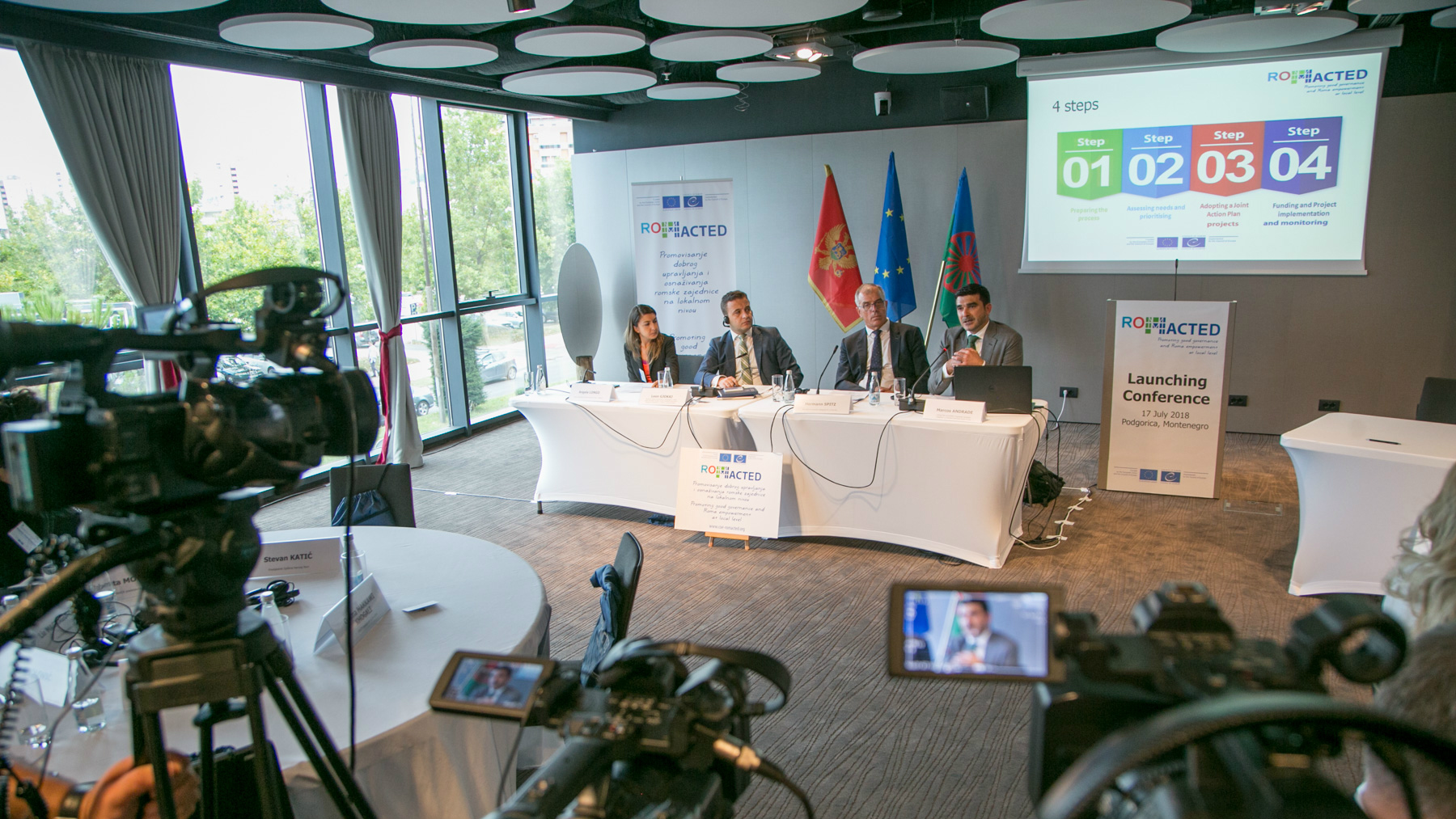 The Joint Council of Europe and European Union Programme, ROMACTED: Promoting Good Governance and Roma Empowerment at Local Level, was officially launched in Podgorica on 17 July. The signing ceremony of the Memoranda of Understanding between the Ministry of Human and Minority Rights, local authorities from eight participating municipalities and the Council of Europe took place during the event. The Memorandum is a tripartite agreement and an official expression of commitment of the national, local and international stakeholders involved in the implementation process. The event also gathered other important national and international organisations from the field of Roma inclusion.

Ms Angela Longo, the Head of the Council of Europe Programme Office in Montenegro, recalled the importance of the joint efforts between the European Union and Council of Europe in promoting the rights of vulnerable groups.

Mr Leon Gjokaj, Director General, Directorate for Development and Protection of Minority Rights, Ministry for Human and Minority Rights, said that the Ministry has been putting continuous efforts in improving the status of Roma and Egyptian communities in Montenegro. Mr Gjokaj emphasized the importance of involving the local level and, on behalf of the Ministry, expressed full commitment to the incoming implementation of the ROMACETD Programme in Montenegro.

The Head of Cooperation (EU Delegation to Montenegro), Mr Hermann Spitz, said that it is a good moment to act in promoting good governance and empowerment of Roma and Egyptian communities in Montenegro. Mr Spitz recalled other examples of the EU in promoting Roma inclusion, making special reference to recently organised Roma seminar as well as the European Commission`s report to Montenegro. At the end of his intervention, he congratulated the Council of Europe for the signing the Memoranda of Understanding with eight municipalities and added “Let us act together”.

Mr Marcos Andrade, ROMACTED Programme Manager (Roma and Travellers Team, Council of Europe), started his intervention with providing insights on Programme`s philosophy and four steps of ROMACTED methodology. He underlined the consistent support and determination of the Council of Europe for the improvement of the situation of the marginalised Roma. He highlighted that positive change requires full commitment and involvement of everyone.

The mayors and municipal representatives from eight municipalities, Bar, Berane, Bijelo Polje, Herceg Novi, Niksic, Podgorica, Tivat and Ulcinj, signed the Memoranda of Understanding to express the commitment towards Roma inclusion. The document was countersigned by the Ministry of Human and Minority Rights, and the Council of Europe. 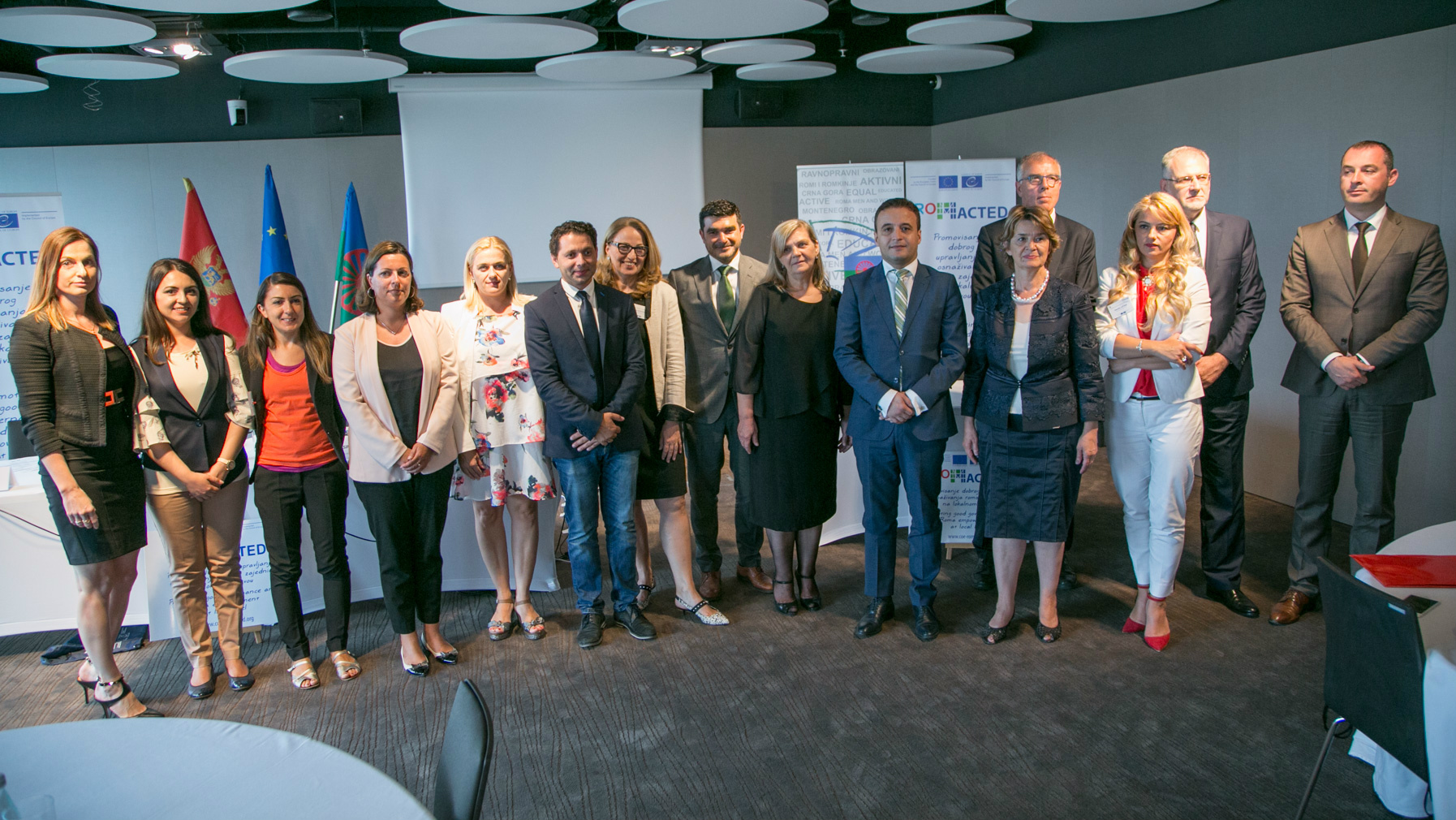 Group photo after the signatures of the Memoranda of Understanding.

The Launching Conference is followed by the National Workshop on Participatory Local Strategic Planning. The workshop involves both the representatives of the eight targeted localities and Roma community. Main emphasis is given to the ROMACTED methodological steps that will be implemented in the upcoming months, as well as to joint participatory planning.

ROMACTED Programme aims at building up political will and sustained policy engagement of local authorities to enhance democratic local governance and empowerment of local Roma communities. It is implemented by the Council of Europe’s Roma and Travellers Team and the Office of the Directorate General of Programmes and it will target approximately 50 municipalities in seven beneficiaries in the Western Balkans and Turkey. The Programme will be implemented by April 2020.