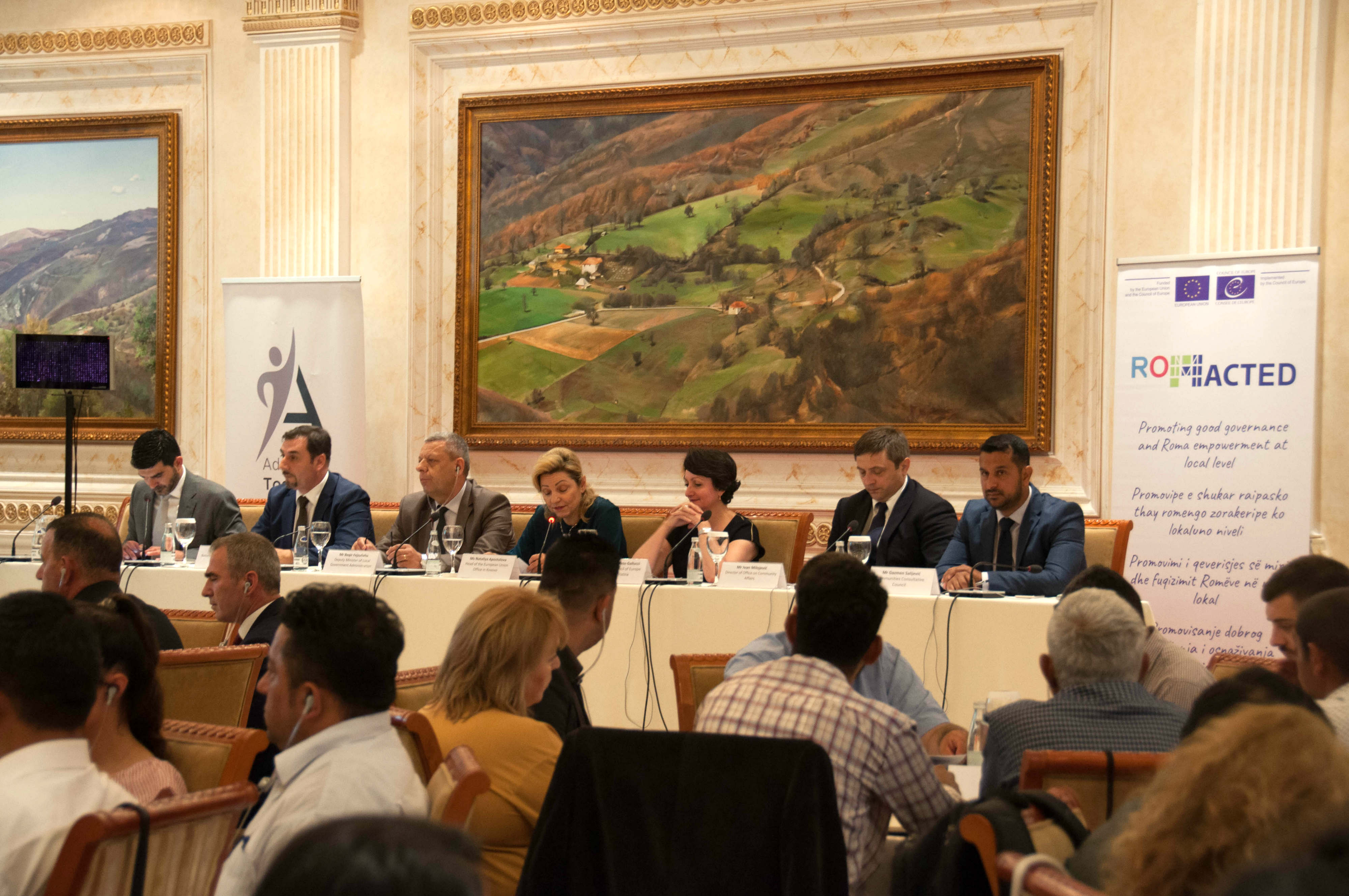 The Council of Europe and the European Union officially launched the joint ROMACTED Programme on ‘Promoting Good Governance and Roma Empowerment at Local Level’ in Kosovo*. The programme aims at engaging local authorities in creating sustainable policies and actions in order to enhance democratic local governance and the empowerment of local Roma communities.

The Head of the Council of Europe Office in Pristina, Ms Isabelle Servoz-Gallucci, in her welcoming speech said that ‘’ROMACTED allows the participation and encouragement of Roma, and it’s about reminding the local authorities on the need to do more about vulnerable communities”. Ms Servoz-Gallucci also highlighted Kosovo’s need for improvement in line with the EU standards as well as the participation of the Roma community which is the essence for the creation of inclusive democratic society.

Head of the EU Office in Kosovo/EU Special Representative, Ms Natalyia Apostolova said that "It takes a good spirit of cooperation in order to make a good difference for the Roma that are struggling for their resistance". Ms Apostolova made a reference to the Roma week that took place in Brussels on April 2018 where the existing gaps between institutions and the Roma community were shown. She encouraged Kosovo authorities at the central and the local level to commit to their policies. "Words need to be translated into actions, lasting differences for Roma and other vulnerable groups should happen", she added. Ms Apostolova conclude by saying that investing on young Roma and including women rights, is a way forward to the disruption the poverty cycle.

Mr Ivan Milojević, Director of the Office of Community Affairs in the Prime ministers cabinet presented the activities that office has undertaken where Roma community is participating. One of them is the internship programme which aims to help disadvantage and neglected youngsters such as Roma. Mr Milojevic discussed social housing activities that are of importance and challenging at the same time for the Roma community. He invited all interested parties to join forces in solving this issue.

Mr Habit Hajredini, National Roma Contact Point, Director of the Office for Good Governance, Human Rights, Equal Opportunities and Anti-Discrimination in the Office of the Prime Minster said that "The government is ready to assist the municipalities especially with the local action groups and share experience with the civil society organizations’’. Mr Hajredini also pointed that coordination between central and local government is of great importance in implementation of programmes like ROMACTED.

Deputy Minister of the Local Government Administration, Mr Beqir Fejzullahu, said that promotion of the principles of the human rights should be carried out by the local institutions. He noted that ‘’Kosovo municipalities dedicate a special importance to the respect of the human rights and in the implementation of the constitutionally guaranteed rights at the local level ".

Mr Gazmen Salijević, Chairperson of the Communities Consultative Council - Presidency, presented the work of the Council which is voicing issues of concern of the different Kosovo communities. He remarked on the communities’ legal framework that tends to remain decorative rather than practical. "There is a huge room for improvement for all of us, it clearly shows us the way to unite and fight discrimination, but we have to accept the reality that communities in Kosovo are in a very difficult situation", ’he said.

Mr Marcos Andrade, ROMACTED Programme Manager, Roma and Travellers Team, Council of Europe, discussed joint efforts of Council of Europe and European Union in regards to the projects aimed at empowering the Roma. ROMACTED is part of the similar effort aimed to work with local authorities on positive transformation. In this light, he emphasized keywords such as: coordination, courage, togetherness and change that make ROMACTED a process rather than a project. He concluded by saying that "there is a need to change the vicious cycle of lack of hope to a vicious cycle of cooperation, interdependence and aspirations for the communities"

ROMACTED Conference brought together mayors and representatives from eight beneficiary municipalities, namely Gjakovё/Ðakovica, Gračanica/Graçanicё, Mitrovicё/Mitrovica South, Lipjan/Lipljane, Fushё Kosovё/Kosovo Polje, Ferizaj/Uroševac, Istog/Istok, and Obiliq/Obilić, where they had the opportunity to express their commitment to Roma inclusion by signing the Memorandum of Understanding with the Council of Europe Office in Pristina. 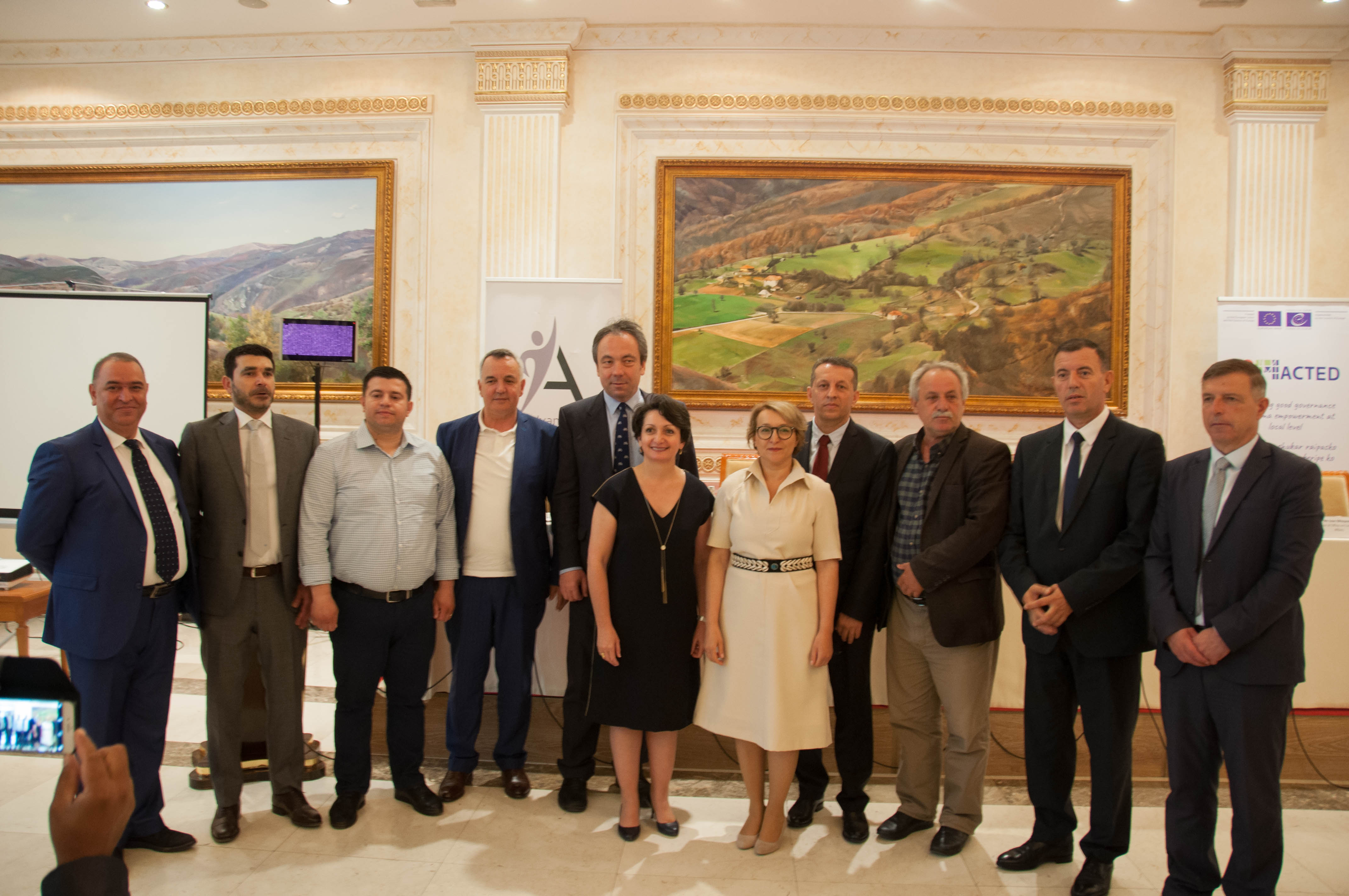 Group photo with the CoE Head of Office, ROMACTED Project Officer and representatives of  participating municipalities, ROMACTED Programme manager and Director of the Support Organisation "Advancing Together".

ROMACTED Conference was also an opportunity to promote artwork from two Roma painters, Ms Fahrije Mehmeti and Mr Bajram Mehmeti . Paintings showcased portrayed the life and the culture of the Roma community in Kosovo.

ROMACTED Programme aims at building up political will and sustained policy engagement of local authorities to enhance democratic local governance and empowerment of local Roma communities. It is implemented by the Council of Europe’s Roma and Travellers Team and the Office of the Directorate General of Programmes and it will target approximately 50 municipalities in seven beneficiaries in the Western Balkans and Turkey. The Programme will be implemented by April 2020.

*This designation is without prejudice to positions on status, and is in line with UNSCR 1244/1999 and the ICJ Opinion on the Kosovo* Declaration of Independence.