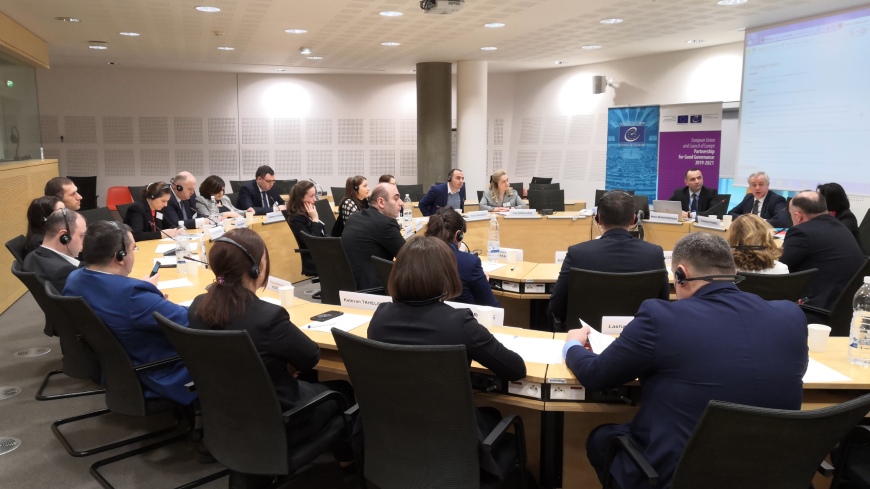 In the framework of the project "Supporting the criminal justice reforms – tackling criminal aspects of the judicial reforms in Georgia", a study visit to the Council of Europe was organised in 25-26 February 2020 for Georgian delegation of 19 judicial candidates at the final stage of the preparatory courses in the High School of Justice of Georgia. The visit primarily aimed to increase the knowledge and awareness about the European Convention of Human Rights standards and its national application. The group also had an opportunity to observe the Grand Chamber hearing in a case of Hanan v. Germany in the European Court of Human Rights that provided real visual experience about the functioning of the Court.

The programme also offered an opportunity for having live discussions with the registry lawyers and judge in respect of Georgia about the recent case-law developments of the European Court. Part of the programme was dedicated to informational sessions by the secretariat members from the standard setting and monitoring bodies of the Council of Europe that included among others the Commissioner’s Office, the Group of States Against Corruption (GRECO), the European Commission for the Efficiency of Justice (CEPEJ) and the Office of the Consultative Council of European Judges (CCJE) and the Consultative Council of European Prosecutors (CCPE). The future judges thus received first-hand information about various conventions and human rights protection mechanisms that are in most cases directly applicable in national jurisdictions.

This event is organised under the Joint Project "Supporting the criminal justice reforms - tackling criminal aspects of the judicial reforms in Georgia" which is funded by European Union and the Council of Europe through the Partnership for Good Governance (PGG II).