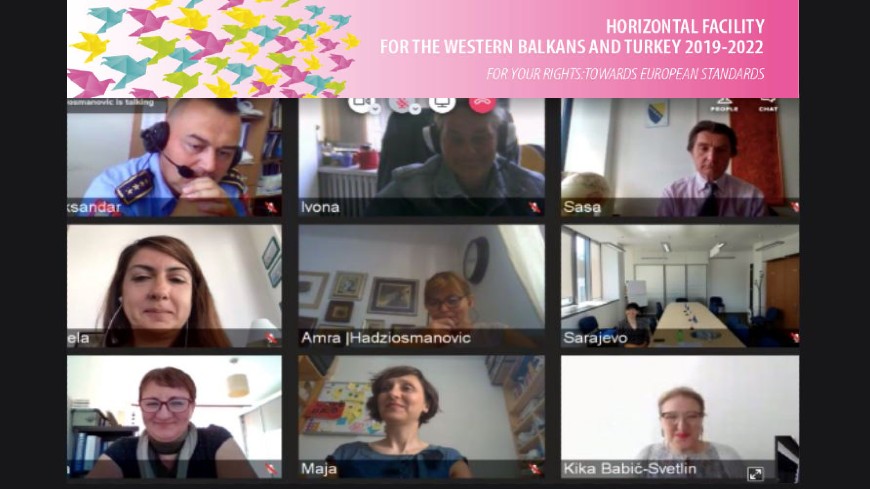 The action “Promotion of diversity and equality in Bosnia and Herzegovina“ organised its second Steering Committee Meeting on 14 July 2020.

Bojana Urumova, Head of Council of Europe Office in Sarajevo, thanked the partners from the European Union and all institutions for being supportive in many ways in the past year of implementation and committed to do so in the future. She explained that the period with COVID-19 reaffirmed the need for such an anti-discrimination project, even more relevant in Bosnia and Herzegovina. Roma minority is facing a very difficult socio-economic period; domestic violence and stigmatisation of LGBTI people have increased, as well as hate speech, that has even evolved and developed to a new dimension, targeting beside usual marginalised groups, also people who are perceived as carriers or are infected with COVID-19. Action's activities in Bosnia and Herzegovina have been adapted accordingly, by means of targeted support and small grants to civil society organizations, enabling the team to better reach out to the population in the field.

Steering committee members were informed about past and future activities and discussed the current state of play of this action, including of its regional sister action.

Members of the Steering Committee commented that many results have been achieved within this period and expressed their appreciation for the support that EU and CoE are providing. Sasa Leskovac from the Agency for gender equality BiH said that “thanks to the action and the CoE team, the assistance provided incentives and motivation for the LGBTI action plan group to work“.

The action “Promotion of diversity and equality in Bosnia and Herzegovina” is a part of the joint European Union/Council of Europe programme “Horizontal Facility for the Western Balkans and Turkey II”, implemented by the Council of Europe.