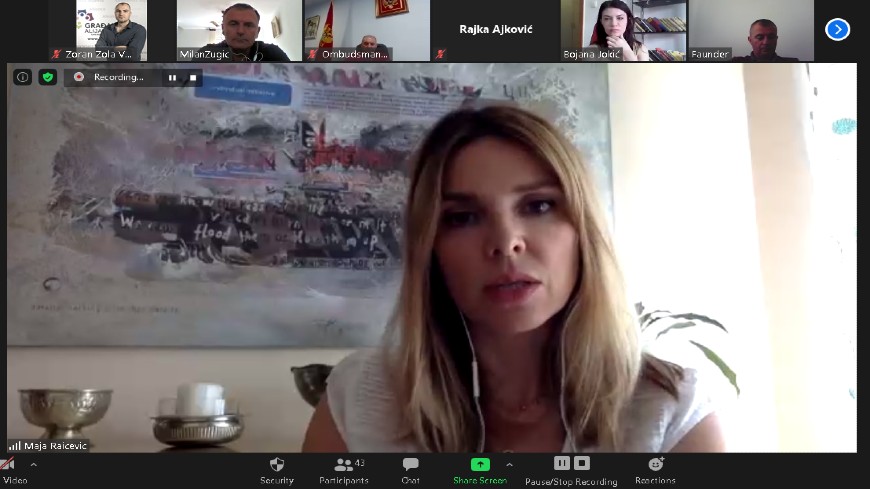 More than forty representatives of non-governmental organisations (NGOs), academia, judiciary, public administration and media took part in a webinar on human rights in the time of crisis organised by Montenegrin NGO Civic Alliance on 9 July. The webinar was organised within the grant awarded to the Civic Alliance by the joint European Union/Council of Europe action on “Promotion of diversity and equality in Montenegro“.

Key objective of the webinar was to bring together leading experts and prominent human rights activists to discuss current position of vulnerable groups, especially women and LGBTIQ people, focusing on negative impact of ongoing COVID-19 crisis on respect, protection and fulfillment of their human rights.

The Montenegrin Ombudsman, Sinisa Bjekovic, informed the audience about the increasing number of complaints the institution has received since mid March, approximately 300 in total. The Ombudsperson's Office was also contacted by over 700 citizens who were dominantly uncertain to which institution to address inquiries related to exercising their rights. The Ombudsman emphasised that the institution reacted proactively in these cases and served as an itermidiary between citizens and competent authorities. They also continue to carefully observe cases of alleged human rights violations and intend to publish a document on impact of health crisis on human rights in the upcoming period.

The executive director of the NGO Centre for Human Rights, Maja Raicevic, elaborated on the growing number of calls their organisation received in March/April, which almost doubled compared to the same period last year. She welcomed the campaigns launched by the Ministry of Interior in co-operation with other state institutions, NGOs and international organisations which contributed to better visibility of available contacts for support and provided an online tool for a quick reporting of domestic violence. However, she noted that the number of executed orders requiring from violators to leave houses was significantly low in the observed period. Cases of violation of labour rights of female employees identified by the Centre during the health crisis also represent an area of serious concern, as well as the systemically neglected issue of unpaid household work which has been dominantly performed by women.

Bojana Jokic, president of the Managing Board of the NGO LGBT Forum Progress emphasised that the majority of requests for help the organisation has received by LGBTIQ people as of mid March was related to providing basic goods. This has been followed with the increased need for a psychological and psychiatrical support. The organisation has also registered an increasing trend of online hate speech towards LGBTIQ population and around 250 charges were submitted to the competent public authorities as a response.

During the Q&A session, participants were interested in discussing cases related to the rights of single mothers who are employed in the health system as well as freedom of assembly. Special emphasis was put on the issue of derogating constitutional rights in public emergencies. Conditions for running upcoming national elections from human rights and health perspectives were also a subject of debate.

In addition to this webinar, Civic Alliance launched a three month long „No Hate Speech“ social media campaign with the key aim to raise public awareness on anti-discrimination principles, harmfulness of hate speech and the European standards in this area. Standpoints of civil society activists and relevant public officials will also be used as a part of the campaign. Please follow their Facebook page, Twitter account and Instagram profile to get regular updates and take active participation by commenting and sharing your views.

Both activities represent an integral part of the project supported within the framework of the joint European Union/Council of Europe programme “Horizontal Facility for the Western Balkans and Turkey 2019-2022” and its action on Promotion of diversity and equality in Montenegro. A special call for grants was opened for partners in the region, to address urgent needs related to stigmatisation and social exclusion during the state of emergency and its aftermath.