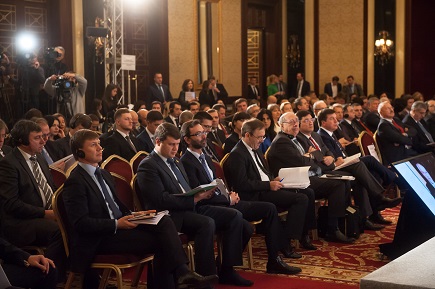 Conference “Constitutional Reform in Ukraine: Outcomes and Perspectives”, which was organised by the Council of Europe in co-operation with Verkhovna Rada of Ukraine with the support of the joint European Union/Council of Europe Project “Consolidation of Justice Sector Policy Development in Ukraine” and the Council of Europe Programme “Decentralisation and Territorial Consolidation in Ukraine” was conducted in Kyiv on 3 December 2015. The objective of the event was wide discussion of the process of amending the Constitution of Ukraine and its impact on current reforms of powers decentralisation and justice.

Discussion panels of the conference were composed of the panels on decentralisation reform and reform of the judiciary, in the frames of which discussion on subjects challenging in both spheres took place.

In his video message Secretary General of the Council of Europe Mr. Thorbjørn Jagland, admitted that “the constitution is foundation of the contemporary democracy. Ukraine needs a solid foundation, a modern Constitution in line with European standards. This is a precondition for stability, prosperity, and this is what people expect. The Secretary General mentioned that “the Constitutional reform is an absolute priority now, and decentralisation is its key part”. The Secretary General added that member states such as Italy, Spain, United Kingdom and Scandinavian countries have transferred powers to the local level. “We can draw on their experience. With our constitutional expertise we can provide practical assistance and legal guidance”, Mr Jagland said. He also noticed that “A constitution which provides for strong local authorities is essential for a stable and prosperous democracy”. “I am convinced this the way forward for Ukraine”, General Secretary said.

Gianni Buquicchio, President of the Venice Commission, stressed on the need for decisive action in carrying out constitutional reform in Ukraine in his video message to participants of the Conference. Mr. Buquicchio pointed out that both decentralisation and reform of the judiciary are long overdue. “Now, finally, thanks to the good co-operation between the Venice Commission and the Constitutional Commission chaired by Speaker  Mr. Groysman, we have draft constitutional amendments in both areas which reflect the recommendations of the Venice Commission”,  underlined  Mr.  Buquicchio. Adopting the amendments on decentralisation would enable Ukraine, emphasized Mr.  Buquicchio,  “to break with the Soviet heritage of a heavily centralised administration and would open the way to self-government at the local and regional level”.  He also mentioned that the constitutional amendments on the judiciary would drastically reduce political influence on judges, both from the President and from the Verkhovna Rada. “A number of provisions were included in the text which will make it possible to get rid of corrupt or incompetent judges”, underlined President of the Venice Commission and added that, without a comprehensive reform of the judiciary, the fight against corruption cannot succeed.

During the panel “Decentralisation reform” its participants underlined the high importance and immediacy of amending the Constitution introducing decentralization component. It was mentioned, that for the first time Venice Commission has positively evaluated the proposed by Ukrainian side amendments. Despite the fact that some speakers mentioned the need for further work and discussion of the Draft Law, most of participants of the Conference agreed with the Council of Europe representatives that called for non-stop reform process in Ukraine. Thus, Deputy Prime Minister of Ukraine – Minister of Regional Development, Construction and Municipal Economy of Ukraine Mr Hennadiy Zubko said “…Ukraine has no time to drag on the reform implementation”. He also stated that 2015 has become a point of no return for decentralization and asked everyone to join efforts. 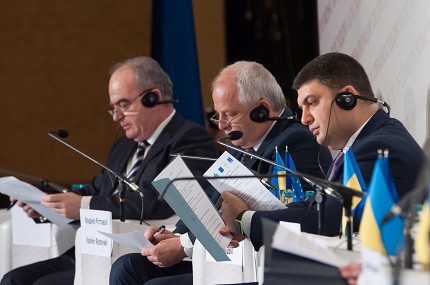 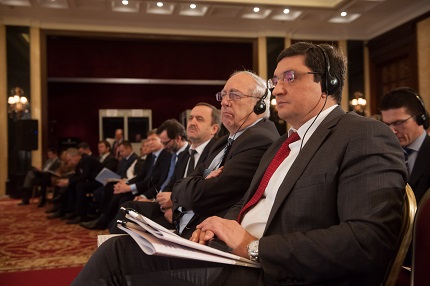 «300 votes. This reminds me of a 2000-year-old story. Then, 300 Spartans stood up to protect their country. They made history … people still remember them. We have an opportunity to find 300 people that can make history and prove themselves true elite, decision makers. We want to be a part of Europe. We have brought up wonderful children, who showed that they can be protectors of this country, but they demand that those, who proclaimed themselves to be elite, to take a decision!”, underlined Yuriy Hanushchak, Expert within Working Group on Decentralisation under the Constitutional Commission.

In the course of the second discussion panel Oleksiy Filatov, Deputy Head of the Presidential Administration of Ukraine, Secretary of the Constitutional Commission, mentioned that Constitutional Commission has worked for almost six months, the draft of Constitutional amendments prepared by this Commission has been discussed by wide circles of the public, five hundred experts were involved in this discussion, almost one hundred proposals have been incorporated into the wording of the draft. Mr. Filatov emphasized that the Venice Commission fully supported this draft since it is in line with its recommendations. 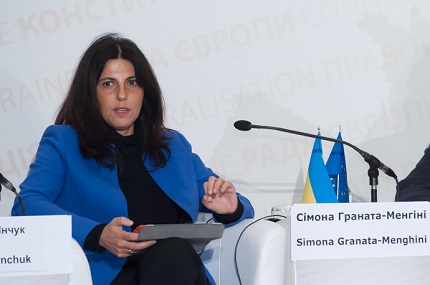 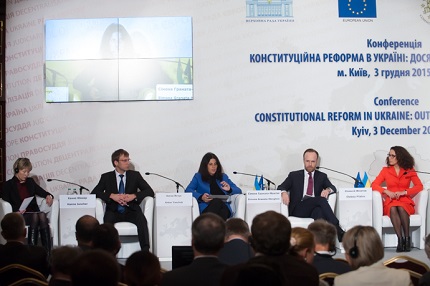 Simona Granata-Menghini, Deputy Secretary of the Venice Commission pointed out that dismissal of all judges is not in line with European standards. “We do not think it would allow to continue administration of justice“, underlined Simona Granata-Menghini. She mentioned that a testing procedure for all judges should be established for testing their professionalism, ethics and integrity and if judges fail to pass the test they would be dismissed. “In our view, the amendments, as they are, fulfil the European standards and fulfil the Venice Commission recommendations”, stressed Ms. Granata-Menghini. On behalf of the Venice Commission, Ms Granata-Menghini expressed hope that this time the Constitutional amendments concerning justice will be adopted and Ukraine will move on with the implementation of the amendments and will move on for the irreversible change towards a more democratic country.

Hanne Juncher, Head of Justice and Legal Co-operation Department, Directorate of Human Rights and Rule of Law of the Council of Europe, indicated that the Council of Europe would advise a caution as regards the approach to the procedure of replacement of judges, otherwise it may result in paralysis of the judicial system as a whole.