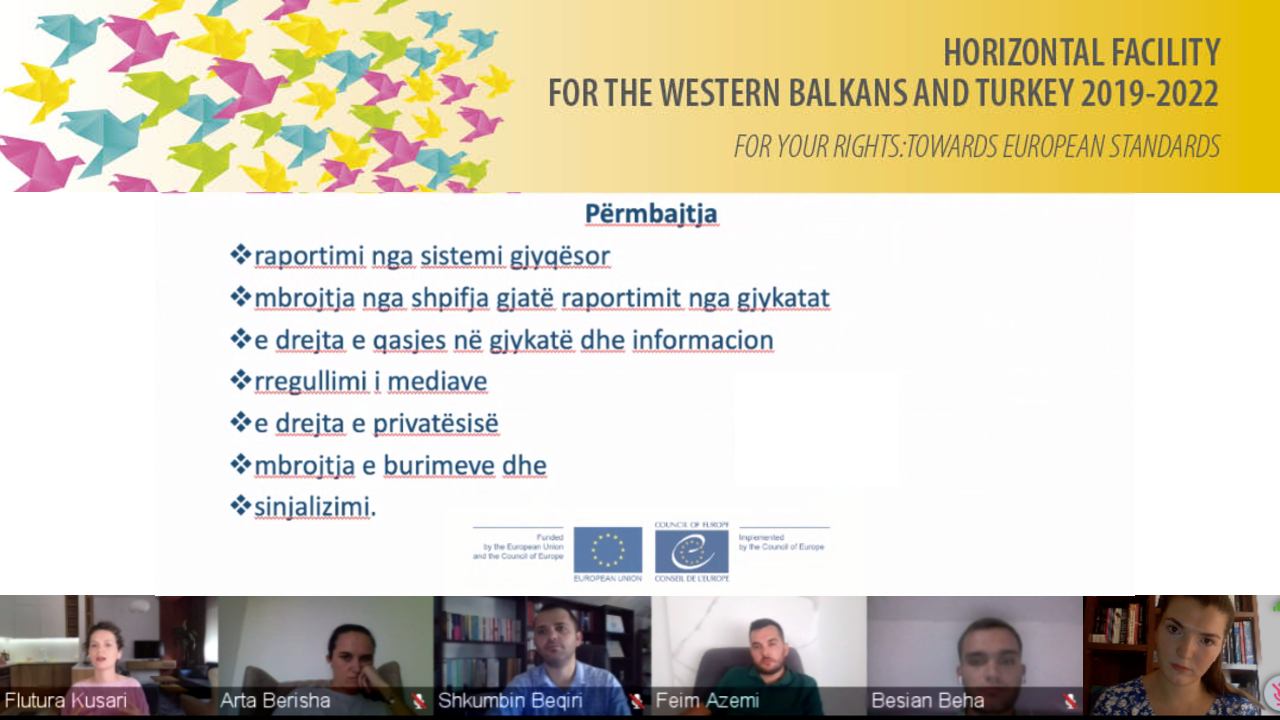 EU and Council of Europe are supporting media actors and institutions in Kosovo and building their capacities to improve the application of European standards in the field of freedom of expression.

The first thematic training workshop for media actors and other relevant stakeholders on good administration of justice and reporting from the Kosovo Specialist Chambers and Specialist Prosecutor’s Office took place online in Pristina on 30 July 2020. Around 20 journalists from online and other media participated in the event. The event was organised by the Association of Journalists of Kosovo in co-ordination with the JUFREX team in the framework of the EU and Council of Europe joint action“Freedom of expression and media in Kosovo (JUFREX)”.

Reporting from the courts, protection against defamation during reporting from the courts, the right of access to court and information, media regulation, the right to privacy, protection of sources and whistleblowing were the subjects covered during the online training. In addition, the journalists were presented with European Court of Human Rights standards such as judicial authority and impartiality, freedom of expression of lawyers and judges, reporting of criminal cases in the media and presumption of innocence.

The discussions during the training provided a great opportunity for the journalists to understand their rights and responsibilities and the concept of good administration of justice.

The added value of the meeting was the presence of the communication team of the Kosovo Specialist Chambers who were invited to take part as guest speakers. The participants had the opportunity to learn about the internal functioning, procedures and competencies of the Kosovo Specialist Chambers. Moreover, topics such as plenary hearings, suspects' rights, information retention, classification, public status of the indictment, oversight of the proceedings in the courtroom, non-compliance with the court order, open, private and closed sessions, live reporting from court hearings were covered during the training.

*This designation is without prejudice to positions on status, and is in line with UNSC 1244 and the ICJ Opinion on the Kosovo Declaration of Independence.